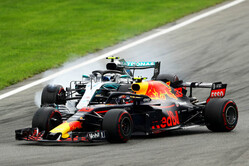 Already frustrated that he had little in his armoury to hold of a charging Valtteri Bottas, Max Verstappen mounted a robust defence of his third position.

Following an incident at the first chicane, the youngster was advised over the radio that race director Charlie Whiting had told the team he had "used his joker" and was now under observation. Nonetheless, when Bottas mounted a subsequent challenge, the Red Bull driver moved across towards the Finn, touching the Mercedes and forcing it on to the grass and leaving Bottas no choice but to use the maze-like run-off.

Subsequently advised that the move had cost him a 5s time penalty that would demote him to fourth, and possibly fifth, the youngster replied: "Don't worry about it!? I gave him space. They're doing a great job of killing racing, honestly."

Refusing to yield to the Finn on track, which cost both of them time, the youngster subsequently admitted: "I know I am losing time to Vettel but I really don't care."

Speaking after the race, he said: "We were in a position we didn't expect to be, and I think I gave him a car's width of space on the left of me, and then he basically clipped my wheel and had to go straight. So I don't agree with it, but maybe they took the penalty because in the middle of the race when he first tried to take me, I went a bit wide, maybe that's why they gave it to me.

"But even then, I think it's not fair, because they gave it straight away. It's a shame, but looking at the positives, the car was working really well."