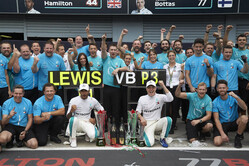 While Sebastian Vettel claims that Lewis Hamilton didn't leave him enough space as the pair headed into the second chicane, resulting in a clash that was not only decisive in terms of the Italian Grand Prix but also, possibly, the 2018 World Championship, Lewis Hamilton admits surprise that the German allowed him the opportunity to get alongside in the first place.

It was intense," the Briton told reporters. "I think we all got off to similar starts and then I got a bit of wheelspin, and then went into Turn 1.

"I was surprised that Sebastian went to the left but then we got into Turn 1 and I think there was a small touch between us all and then powering down to turn four, again, a bit surprised Sebastian chose the inside and not go through the outside of Kimi... that was my opportunity.

"I stuck it down the outside and had to make sure I was far enough alongside as I had an experience a few years ago where I was on the inside - back in 2012 or something like that - and it didn't come off very well, but I thought there was enough space between us and I think ultimately, I am guessing he may be locked up. I don't know, we touched it was a brief moment. It just damaged the car a little bit but I was able to continue and the rear was moving around a little bit more, so it made it a little bit more difficult, but not impossible.

"Today was down to the least mistakes and ultimately and looking after the tyres," said the world champion. "Valtteri did a great job in extending his stint which enabled me to close up to the back of them together so great team work today, a great pit stop, great communication with the guys and ultimately I was in pretty good form today so definitely I am very, very happy with it."

Fact is, not for the first time, Vettel got it wrong, had he not clashed with Hamilton on the first lap, had he waited, with the Ferrari's obvious power advantage, he could have retaken Hamilton next time around in the same way the Briton passed Raikkonen, or simply waited for a later opportunity. He didn't need to win the race on the first lap.