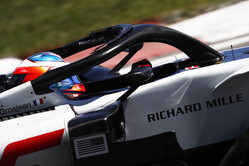 Having previously claimed that Renault's protests of Romain Grosjean's floor at Monza was driven by jealousy, Haas team boss Guenther Steiner now insists the move was unsporting and the result of the French team being leapfrogged by its American rivals in the standings.

According to the Italian, there is an unwritten rule in F1 that sees teams warn one another in advance of a race if they are going to subsequently submit a technical protest.

"My opinion is that for a long time there was not a protest after the race," he told reporters in Singapore, "it's a long, long time since (it happened).

"I wouldn't have done the same," he said. "I would have done what other people have done before. But Renault is in a position that they need to make sure they are not overtaken for fourth position, and I think they thought that they need to do something otherwise they finish fifth."

Asked if he was hinting at a 'gentlemen's agreement', he replied: "Absolutely. They can say before the race 'if this is not fixed, we are going to protest you'. That's what I was talking about because it was before my time the last time this was done.

"I don't know why they did it, but it's one of these things. Renault did what it needed to do, but I think a lot of people have questioned it internally and they are right to.

"It's a mix of taking regulations, interpretation, ambiguity and information, it's very complex," he said of the appeal, which is scheduled for early November. "I think the stewards didn't understand what we tried to explain. They disqualified us but at the court of appeal they have a better understanding and more time for us to explain how it went down.

"It's 50/50, it could go both ways," he admitted, when asked how he thinks the appeal might go. "I would never say I am confident of winning because you never know what is happening. We have no control on the decision, you can do the best you can with your lawyers and your technical people to explain what actually happened, the whole process and why we ended up where we were and why they got it wrong. But then again, I'm not on the court of appeal. I cannot decide, so I would say 50/50 so it could go both ways."