Five drivers to be demoted to the back of Sochi grid 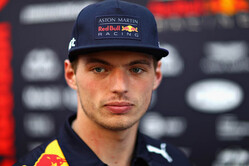 Before a wheel had turned, five drivers faced demotion to the back of the grid for Sunday's Russian Grand Prix.

As expected, both the Red Bull duo and their counterparts at Toro Rosso have taken new engines for this weekend's race, with Fernando Alonso also taking on a new power unit.

All five also take on new turbochargers, MGU-H and MGU-Ks, while only Verstappen and Alonso take on new energy stores, the Dutchman, Spaniard and Hartley taking on new control electrics also.

With the five due to line up on Sunday in the order the elements were first used on track, there was a mad scramble to see who would be first out in this morning’s session, the Bulls pipped at the post by Lando Norris who was driving Alonso's car in the session.

As a result, as things stand, Alonso will start 16th, ahead of Ricciardo, Verstappen, Gasly and Hartley.