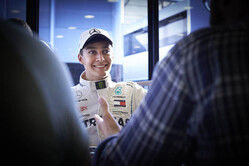 With two rounds remaining, and a 22-point lead, George Russell looks to be heading towards the 2018 F2 title.

If he does secure the title - his main challenger being Lando Norris - it will present Mercedes with a problem for the German outfit appears to have an embarrassment of riches in terms of gifted drivers but nowhere to place them.

Already struggling to find a berth for Esteban Ocon, who appears set to be ousted from Racing Point Force India when Lance Stroll arrives, Mercedes is also looking for a seat for Russell.

"There are many good drivers who merit a drive in Formula One, both young ones and more experienced ones," admits Toto Wolff, "but at the moment cockpits are a limited commodity.

"Both Esteban and George certainly deserve to be in Formula One," he adds, "(and) we are still working on options and will carefully decide what's best for them.

"If that means having to play the long game, then we will continue to prepare and develop them."

Meanwhile, as he searches for seats for Ocon and Russell, was asked how it must feel for Valtteri Bottas, who is looking increasingly likely to need to fulfil a 'wingman' rile in the remaining races rather than making a title bid of his own.

"For every racing driver, that's a very difficult situation to be in because everything you dream about and everything you work for is winning the World Championship," admits the Austrian. "When you realise you're not in the hunt any more, that's very difficult to handle. But Valtteri has shown that he has the speed, the talent and the work ethic to win in a Mercedes.

"He has always been a team player and that is one of his greatest character traits. Valtteri could have won races this year, but the odds were against him. However luck isn't just a one-way street; and I know that Valtteri has every ingredient it needs to win at this level. He just needs to keep working hard to improve and trust that the tables will turn for him."

Finally, asked if Lewis Hamilton's 40-point lead in the championship will affect how Mercedes approaches the remaining races, Wolff admitted: "It's obviously better to have a lead than to not have it, but there are six races remaining and plenty of points to score, so it doesn't give us any comfort.

"We will continue to concentrate on every single session, trying to optimise the car in every possible area," he continued, "and we will go for the race win.

"There is no naive optimism about our situation within the team: our mind-set is very positive, we are energised, the factories are buzzing and we're excited for the fight that we will certainly have in the next six races."