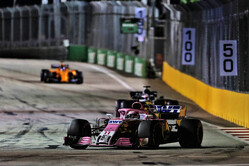 Not for the first time, yesterday's Singapore Grand Prix saw the Pink Panthers, Sergio Perez and Esteban Ocon, battling for the same piece of tarmac.

And not for the first time, as was the case in Azerbaijan and Spa Francorchamps last year, it ended in tears.

A race which should have seen Racing Point Force India grab another handful of points, thereby closing the gap on sixth-placed McLaren, instead saw the Silverstone-based outfit leave Singapore with nothing other than a damaged car, wounded pride and a drive-through.

With Ocon out on the first lap, Perez' race went from bad to worse, the Mexican subsequently letting his frustration get the better of him as he sought to pass Sergey Sirotkin, a deliberate nudge at the Williams leading to a drive-through penalty.

"It's unacceptable for them to come together like that in an area there's no run-off room," he told Sky Sports. "They've got to leave each other room. The team is more important than any one individual and we'll have to go back to the rules we instilled on them last year.

"If that's what they're going to do we're going to have to take control from here," he warned. "Once they're in the car it's hard to control what they do but prior to that we can control them. It's been over a year since it happened and it was in Baku last year that we installed the rules, it was after Spa if you remember, and from Spa until here it hasn't happened so we are back to the old rules.

Quite what the "other ways" referred to is anyone's guess, but with the team under new ownership, it is not impossible that Lance Stroll could be drafted in before season end.

Furthermore, with increasing pressure on the sport to find a berth for Esteban Ocon in 2019, it could well be that, despite his significant backing and a contract, the team's new owners might feel Perez is simply too volatile at times, something Lawrence Stroll is certain to ponder as he finalises his team's line-up for next year.