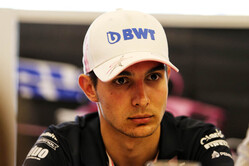 Zak Brown has admitted that Esteban Ocon's close ties to Mercedes were a key factor in the Frenchman not getting a 2019 seat with the Woking team.

Though there remain 11 seats yet to be officially filled, there is every possibility that the talented Frenchman could be sidelined next season as more of the 2019 jigsaw pieces fall into place.

Initially tipped to go to Renault, that particular avenue was closed down when Daniel Ricciardo made his shock decision.

Now, in the wake of Lawrence Stroll's purchase of Force India, it looks as though Sergio Perez will get the second seat alongside the Canadian billionaire's son.

Rumoured to have been making a mid-season switch to McLaren, even to the point of having a seat fitting, Zak Brown had admitted that ultimately it was Ocon's close ties to Mercedes that caused the Woking team to look elsewhere.

"Esteban is someone that we rate extremely highly," said the American, "and I think any time when a driver, you're looking to something long-term, has ties to another manufacturer, that's a tick in the wrong box.

“Hopefully Esteban will get a ride, or maybe stay where he is, because he certainly deserves to be in Formula One," he added.

"But this manufacturer having a hold on these drivers is certainly something that is a negative when you are not with that certain manufacturer, and you want to have a five, or ten-year view on whether you can have the driver or not.”

Lando Norris, who was confirmed by McLaren on Monday, will partner Red Bull protégé Carlos Sainz, who was effectively dropped after just one year with Renault, the Spaniard having been allowed to move last year as part of the deal which saw Toro Rosso spit with the French manufacturer and team up with Honda.