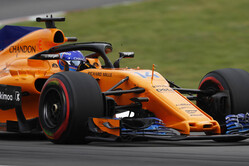 After torrential rain and thunderstorms on Friday morning, it was almost a foregone conclusion that running during the first free practice session at the Italian Grand Prix would be affected by the inclement weather.

Test and Reserve Driver Lando Norris, who once again took the reins during FP1 for the second race weekend in succession, this time in Stoffel's car, completed just nine laps on a wet track and finished the session in 20th position. On the other side of the garage, Fernando completed 14 laps and set his fastest time on a slightly drier track, for 14th position. Both drivers focussed on evaluating aero performance and test items, although the data they were able to capture was limited given the conditions.

By the afternoon, the rainstorms had ceased and the track had dried out. Despite a shortened session due to a red flag, both Fernando and Stoffel completed a solid amount of mileage and focussed on preparation for Sunday's race. They finished the session in 18th and 19th positions respectively.

Fernando Alonso: "It was a strange day today, with the rain in the first session and Marcus' (Ericsson) accident in the second - thank God he's okay - so, like everyone else, we lost some track time. We missed a couple of runs that we had programmed, including some long runs, so we will try to make up for this tomorrow and get that information.

"I think we more or less confirmed today that it's going to be a tough weekend for us as a team in terms of performance, and we'll try to do a better job tomorrow.

"After Sunday's accident, I still sometimes feel some pain in my hand and my back in some corners, so when I'm out of the car I try not to stress them too much. I think on Sunday it's going to be perfectly okay.

"Last, but not least, a big well done to the FIA, who have done an amazing job over the years to improve safety."

Stoffel Vandoorne: "Even though I didn't do FP1 I don't think I missed a huge amount with the weather conditions. FP2 was dry and a much more normal session than the morning apart from Marcus' (Ericsson) crash at the start.

"I don't think there will be any miracles for us here this weekend, we've expected it to be difficult and I think practice has already confirmed that it's going to be tough for us. We'll see what we can do tomorrow.

"I like this track, I have some good history here in different series that I've raced in before, so I usually enjoy coming here and racing."

Lando Norris: "I had some fun today of course, although I didn't get as much running as I would've liked. That happens sometimes and in the end, I was happy anyway. I saw what to experience on a race weekend and again what it's like to compare to Fernando, which is something pretty good for me.

"It would have been nice to get a dry track - or for it to be completely wet for longer, to get used to driving this car in the wet, which I enjoy quite a bit.

"It was still a good session for us, although there weren't many laps completed. We did some aero tests - some for his year, some for next. We tried as many things as we could without compromising anything for this weekend. The team learned quite a bit of stuff today, and of course I learned a lot too."

Gil de Ferran, Sporting Director: "Despite very unfamiliar conditions for Lando in a Formula 1 car, he once again acclimatised himself very quickly and produced a sound, error-free performance in FP1.

"Following Belgium, we came into this weekend expecting this circuit to again expose some of our weaknesses. Today's result confirmed this expectation.

"Regardless, we completed a variety of tests to try and shed further light on our cars' performance. The chances of weather interfering in tomorrow's proceedings once again are high, hence we can expect a very exciting qualifying session."