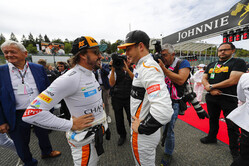 A difficult Belgian Grand Prix for the whole team, as Fernando retired after a dramatic first-lap incident and Stoffel finished his home race in 15th position.

At the start Fernando was hit from behind by a late-braking Nico Hulkenberg who had locked his wheels. Fernando was launched into the air over the top of Charles Leclerc, but thankfully all three drivers were unhurt.

Stoffel had a lucky escape from the chaos at the start, but was held back by the performance of the car and was unable to make any real headway through the field despite pitting early under the Safety Car on lap two. The team will now re-group over a matter of hours before the team moves to Monza for next weekend's Italian Grand Prix.

Fernando Alonso: "I'm disappointed. We made a good start. There were a couple of possibilities of overtaking in Turn One - you play it cautious, you brake at the same point, then you look in the mirrors and see the guys behind you behaving as if this was the last corner of the championship.

"I saw Nico in the mirrors coming with all four wheels locked, at a very high speed. He completely missed the braking point by a long way, not just a couple of metres. There was no way I could avoid that, then I felt the impact and flew over Charles' car. Nico played bowling a little bit with us today.

"It's sad to see this happening, because usually these kinds of accidents have major consequences, but on the positive side, everyone involved is fine, especially Charles, as I flew over his car. Not that we needed any proof, but the halo showed again today it is a very good thing to have on the car.

"Now I feel okay, but we need to wait a couple of hours to see how things develop when it cools down."

Stoffel Vandoorne: "It was a pretty boring race to be honest! I was on my own all the way. It was a very unfortunate crash on lap one, luckily everyone was unhurt so that's the most important thing.

"We tried to do something different with the tyre strategy and pit behind the Safety Car, and unfortunately that didn't really pay off. I think the race in general was quite boring for everyone, there wasn't much overtaking and for us there were no miracles today.

"Whatever we did there was nothing much we could get out of it. Whether pitting the second time was the right thing to do is hard to tell, but it didn't make much difference. We more or less confirmed our pace anyway and we aren't very quick at all. The only chance we had for a good result was to try something completely different and it didn't work, but I don't think we lost anything by doing it."

"We're relieved that no-one was hurt at the first corner accident, which took Fernando out through no fault of his own.

"With Stoffel, we soldiered on as best we could, but we were unable to overcome our pace deficit.

"We now have a lot of work to do in a short amount of time, repairing cars and carefully further analysing our performance in Spa.

"We move on and focus on maximising our performance at Monza next weekend."