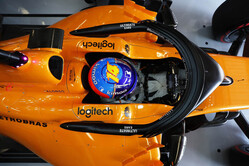 Fernando Alonso: "Monza is a very special circuit for me and I have a lot of very happy memories there. It has a different feeling to many tracks - maybe because of the heritage or the fans, I'm not sure, but the emotions you feel when the fans invade the track after the race is like nowhere else in the world - there's so much passion there.

"For us we know this weekend will be difficult, like in Spa. Better tracks are coming for us, that's for sure, but Monza has all the characteristics that expose the weaknesses of our package. We just have to work as hard as possible and see what we can get out of it.

"After the accident in Spa last Sunday I know the team has been working very hard to make sure we have enough parts for this back-to-back race. I'm very grateful for their efforts and I'll still be giving it maximum attack even if it will be a challenging weekend."

Stoffel Vandoorne: "Obviously Monza will be a challenge for us, as we experienced in Belgium. Our car struggles on tracks that are high-speed and low downforce and this is probably the most extreme version of this.

"Despite this, the team is working as hard as ever to make the best of what we have each race weekend. I am as determined as they are to produce the best possible results given the limitations of our package.

"I really enjoy driving around Monza - it's an incredible track with a huge amount of history. I think every Formula 1 driver appreciates the reputation it holds as one of the most famous and exciting tracks on the calendar."

Gil de Ferran, Sporting Director: "The whole team loves returning to Italy each year - the location is legendary, the fans are incredible and as racers at heart, we appreciate just how special this grand prix is on the calendar.

"Once again, we will be giving Lando further experience behind the wheel of the MCL33 on Friday in the first free practice session. This is another opportunity to continue his development, this time in Stoffel's car, and build on the positive work he completed for the team in Belgium.

"As everyone saw, last weekend was a difficult one for us, where we learned some important lessons. Now we're focusing all our efforts on preparing ourselves in the best way possible for the Italian Grand Prix."

Straight-line speed: More than 75 per cent of the lap is spent on full throttle - the highest percentage of the season - and the cars exceed 300km/h (186mph) on four occasions around the lap. Hence Monza is known colloquially as the Temple of Speed.

Unique difficulty: The pit-lane. Traditionally, there are more speeding offences in the Monza pit-lane than at any other racetrack. The reason given by the drivers is the speed differential between the 80km/h (50mph) pitlane and the 350km/h (217mph) start-finish straight makes it difficult for them to judge their braking point for the pit-lane entrance.

Biggest challenge: Braking. There are only six braking zones on the lap, but each of them is severe, which makes Monza one of the hardest of the season on brakes. The average deceleration is 5.5g, with the hardest braking zone being Turn One, where the cars slow from 350km/h (217mph) to 70km/h (43mph) in just 2.8s.

Aero: Low downforce. In 2016, the most recent dry qualifying session, pole position was set at an average speed of 257km/h (159mph). That makes Monza the fastest lap of the season and, as a consequence, the lowest downforce track. With less aerodynamic grip, the cars are more skittish to drive than normal, particularly under braking.