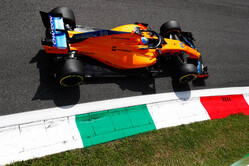 Just days after being taken out at the first corner in Belgium, Fernando Alonso lasted just 9 laps of the Italian Grand Prix before suffering a loss of power.

Scheduled to test with Andretti Autosport in Alabama this week, Alonso, who seemingly has just seven more races before turning his back on F1, admitted his growing frustration at the McLaren's lack of reliability.

As he slowly headed into the pits during yesterday's race, he reported: "Same problem, no power."

Subsequently asked if this was the latest issue in a difficult season, he admitted: "It is, it is.

"It is a shame because sometimes we were in the points like here," he continued. "But the reliability of the team seems to make a step backwards. We definitely need to improve that for the remaining races."

His retirement was all the more galling because not wanting a grid penalty he rejected the offer of the latest C-spec Renault engine in order that he could fight for points. Though Renault claimed the upgraded unit would be more powerful but possibly less reliable, it got Verstappen home to fifth, while Ricciardo suffered a clutch issue.

"We were tenth again, already in the points," sighed Alonso. "Then something unexpected... it was unlucky again.

"At Spa it was the first corner," he added. "Here again in the first couple of laps a mechanical issue and we lost maybe the possibility of taking points.

Alonso's comments come just days after (another) nightmare weekend for teammate Stoffel Vandoorne which saw the Belgian claim the team had taken a step backwards.