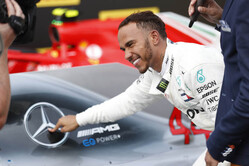 Recent financial filings by Mercedes reveal that the German car manufacturer increased spending on its F1 engine operation by 44% to £183.1m in 2017.

No doubt, as far as the manufacturer is concerned, it is money well spent, for as it heads towards its fifth successive constructors' and drivers' titles, it has won 74% of the 94 Grands Prix held since the introduction of the hybrid formula since it was introduced to F1 at the beginning of 2014.

While the Mercedes F1 team was bought in 2010 from Ross Brawn, who continued as team boss until 2013, when Toto Wolff and Niki Lauda signed on and everything kicked up a couple of gears, the engine division, High Performance Powertrains (HPP), is wholly-owned by Mercedes' parent, Daimler.

Forbes reveals that the financial statements say that "the United Kingdom remains a global centre of competence for the motorsport industry and this, coupled with the government's support for research and development has enabled the company to continue to invest in a highly skilled workforce and technologically advanced asset base."

Indeed, the UK benefits greatly from the engine division's presence, which, according to the statements, "contributes over 83% of its total expenditure within the United Kingdom". And with the company dealing with around 1,500 UK-based suppliers including designers, equipment manufacturers and haulage firms, the economic impact is far-reaching and significant.

In addition to powering the works F1 team, Mercedes power units are found in the Williams and Force Indias, with Toto Wolff recently revealing that each team pays around £15m for leasing the engines and the remainder of the engine division's revenue coming from Daimler. In 2017, revenue increased by 36.7% to £192m though increased costs resulted in pre-tax profits reversing by £4.4m to £8.5m.

However, F1 isn't the only reason for the increased costs, for as the financial statements confirm, the company is doing "work to support the Mercedes entry to the FIA Formula E championship for electric racing cars for the 2019/20 race season. This will involve further enhancement to the company's technology and skill base".

Like the engine division, the Mercedes Formula E team is wholly owned by Daimler, while Toto Wolff is one of four directors on the board. The Austrian owns 30% of the Mercedes F1 team, with Niki Lauda owning 10% and the remainder in the hands of Daimler.

In addition to the Formula E project, the engine division is also involved in the 'Project One' programme, the first 'production car' to feature an F1 engine and set to make its debut next year, albeit with a £2m price tag.

Mercedes has made "significant capital investment and enhancement of the company's technical capabilities to adapt a current Formula One Power Unit to road use", reveals the financial statement, and indeed, it confirms that in 2017 Mercedes spent £16.2m on its plant and equipment and £6.8m on land and buildings.

"Management have considered the potential impacts of Brexit and work is continuing with regard to both people and supply chain potential impacts," concludes the financial statement. "Management do not anticipate any significant risks to the business."