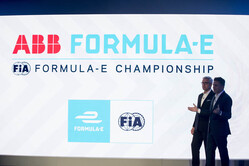 F1 breathed a sigh of relief this week when, despite being shown the door (again) by Ferrari, Kimi Raikkonen found a berth with the team that brought him into F1 in 2001. Losing one character - in the form of Fernando Alonso - is bad enough for F1, but to lose two... well, it's like Oscar Wilde said about parents.

As he seeks to take the series forward, Alejandro Agag, the driving force behind Formula E, admits that despite his countryman's focus on motorsport's Triple Crown, he would love to see him go all-electric, targeting securing the two-time world champion for the 2019/2020 season.

"I've been speaking with Fernando," Agag told the South China Morning Post. "Actually, I was with him in Monza, I think he's going to America this season, but definitely for the season after we are going after him.

"I speak with Fernando a lot," he revealed, "he likes Formula E a lot. He's very car-focused, Fernando. He's very curious about the new car that we are starting in season five. He wants to know more about that car and he think it looks very cool. Fernando is all about the car."

Though yet to convince the fans, particularly those who still hold F1 as the pinnacle of motorsport, Formula E is slowly building, attracting more 'name' drivers and manufacturers.

Indeed, the coming season, which gets underway in Saudi Arabia in December, will see Alonso's former teammate, Felipe Massa, line-up on the grid.

"Massa is a great driver," says Agag, "he's a great friend, he's a really cool personality, and he has a big following all around the world. For him to drive in Formula E, it's great for the championship. We have a great line-up of drivers, second only to Formula One. Apart from that we are probably the best in the world.

"More drivers are doing fully Formula E, because of the growth, there are bigger budgets to pay the salaries so the drivers are exclusive. Formula E is becoming the priority.

"We want to go over a billion views for season five," he admitted, "we need to keep growing the reach of Formula E and get more fans. The championship is great, the technology is making huge steps, we've done all the things in the right order.

"I think as Formula E grows, everyone is paying more attention. Everyone thought this was going to be a short term venture, now it's really consolidated as a worldwide championship with all these big brands and car manufacturers.

"There was huge progress last season. We are far beyond our expectations. We signed a title sponsor, ABB, and announced a deal with Mercedes and Porsche, who left other championships to join Formula E. We have next year Nissan and BMW starting to race with teams.

"This championship is becoming huge. This grid, there's going to be a lot of power, not just in terms of electric."