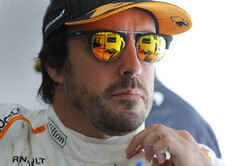 Fernando Alonso hopes that Red Bull will apologise to him after the Austrian team denied it had sought to sign him.

In an interview with Sky F1, the Spaniard claims that over the years the Austrian outfit has made no less than six approaches, his claim coming just days after Helmut Marko and Christian Horner had both dismissed the two-time world champion as a replacement for Daniel Ricciardo because he is forever surrounded by chaos.

"We were negotiating with him in 2007 or 2008," Marko told Austrian broadcaster Servus TV. "His demands were very tedious back then.

"If you look at his history, in McLaren and Ferrari, it was always a one-man show," he added.

"The comments of Christian Horner this summer and Mr Marko are completely out of context," he continued, "surprise comments about me creating chaos and being a difficult man to work with.

"One, they never worked with me," he added, "and secondly they've been chasing me for five or six occasions in the last seven years, and now they say that, that they are loyal to their programme and their commitments and their junior drivers.

"It has been weird, it has been unfair to me. I wrote to Christian after his comments this summer, he apologised by email, and hopefully he'll apologise again this weekend."

In a subsequent interview with Sky F1, Horner said: "To be totally clear, there was no offer to Fernando Alonso for next year. He is a fantastic driver and a great talent, he has chosen his path.

"Obviously Flavio reached out, even FOM reached out, but it was clear from the onset," he insisted. "We did offer Fernando Alonso a contract, but that was back in 2007! To my knowledge, no one within Red Bull has offered him one since.

"The position within Red Bull has always been very clear. We invest in youth and have a talent pool through the Red Bull junior programme as has been the case with Sebastian Vettel, Kvyat, Ricciardo, Max Verstappen, we were always going to draw on the talent we have."