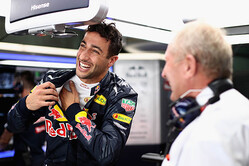 It's fair to say that most were convinced that Daniel Ricciardo would be remaining with Red Bull for 2019 and 2020, indeed, in addition to murmurs that the Australian had already agreed a deal, reliable sources in Australia close to the driver suggested the contract had already been signed.

Then, at 12:07 on Friday 3rd August, as the summer break got underway, Red Bull issued a brief statement that the Australian was to leave the team at the end of the season. 51 minutes later, clearly caught on the hop, Renault confirmed that Ricciardo would be partnering Nico Hulkenberg, thereby filling a significant portion of the 2019 jigsaw while killing off Esteban Ocon's hopes of a move to the French outfit.

Speaking to Austrian broadcaster Servus TV, Helmut Marko reveals that he was as shocked as anyone.

"I don't understand it," he admitted. "It was a very strange situation. The negotiations were difficult but on Wednesday before the Austrian Grand Prix we were talking for two hours and came to an agreement. During the weekend, we were talking and renegotiating again.

"I can only assume that maybe he doesn't believe in the Honda project or that Renault offered him a lot of money," added the Austrian.

"Including his time in the junior programme, he has been with Red Bull for ten years," he said of the Australian. "He said he needed a change of surroundings. I can understand that, but it's a pity because he is one of the strongest drivers. His overtakes are great. They come out of nowhere and sometimes his opponents don't even realise they are being overtaken."

Convinced that Red Bull, with the aid of its new partner Honda, will be far ahead of Renault, referring to Ricciardo's traditional podium celebration, Marko concluded: "It will be difficult to have more shoeys in the future."