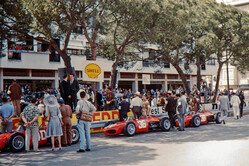 Having "parted ways" with Pascal Wehrlein, Mercedes boss Toto Wolff is still in need of berths for Esteban Ocon and George Russell for 2019, and as hopes of finding them become ever more slim the Austrian has suggested the idea of teams being allowed to field third cars.

The third car, according to Wolff, would be driven by a 'young driver' and would not be eligible for points.

With the suggestion due to be raised at today's meeting of the Strategy Group, FIA race director, Charlie Whiting, though personally in favour of the idea, admits it is unlikely to get the green light.

"My personal view is that it would be nice to have a few more cars," he told Motorsport.com, "but honestly I think it's very unlikely.

"It would be nice to have a few more teams capable of winning, of course," he admitted, "but this year it's more competitive than it's been since the beginning of this engine era. Equally if you have a more evenly competitive field, it's a good economic model as far as one can see. This is why GP3 teams have always had three cars.

"With next year's F3 the plan is ten teams with three cars each, because it's a good business model, because it enables the third car price to be lower. I would think that would work in F1 as well."

However, at a time the sport is seeking to introduce a budget cap, which would mean a reduction in staff numbers, a third car would actually mean more personnel.

"The rules are based around two-car teams," said Whiting, "so a lot would have to be looked at. They're allowed sixty operational personnel. How many more would they need? There's a big difference between what they'd need and what they'd say they need. We'd have to decide what's the right figure. It wouldn't be thirty, it might be ten."

In terms of logistics, he says: "We would be able to manage. People would have to squeeze in a bit, and wouldn't have as much space."

However, rather than current teams entering a third car, the sport is seeking new teams to enter the sport.

"Getting new teams, as we know, is tantamount to impossible at the moment," admits the Briton. "But that's something that we're hoping will improve, of course, if everything works out as planned, with the revenue distribution and the cost cap.

"The car will hopefully be regulated where the non-performance parts are standard or prescribed, and the performance differentiating parts are team only, where you can't get them from everybody else. A lot of the stuff that Haas currently buys from Ferrari will be prescribed or standard. However the suspension, brake ducts, air ducts, all of those are currently non-listed, so they are allowed to buy those, and there is a huge performance in them. That's what we're hoping, anyway."

Picture credit: Many thanks to Brian Watson, whose superb pictures from the 1961 Monaco GP, and many others, can be found - and bought - here