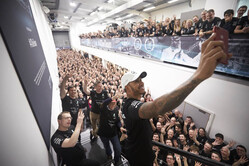 In an interview with Forbes in which she mainly focusses on her desire to see more women in motorsport, Susie Wolff reveals a conundrum currently facing the sport.

Asked what F1 should be doing to break down gender barriers, she reveals that (her husband) "Toto and the head of HR at Mercedes F1 are 'very conscious of the fact that there's not enough people applying for the top positions'.

"He is not concerned about what gender they employ," she admits. "He's just concerned about the level of talent and he will always pick the best candidate for that role, regardless of gender.

"I think they're very conscious of the fact that there's not enough people applying for the top positions. The Head of HR at Mercedes is also very aware of that and is trying to change the situation."

Of course, if Mercedes, known to have the biggest headcount of the British-based F1 teams, is struggling to fill its top positions, what of those teams further down the pitlane with less money available.

To further complicate the issue, there is the proposed budget, the first phase of which is due to be introduced next year.

In May Red Bull team principal Christian Horner said that the budget cap could see teams being forced to shed "potentially thousands of jobs" with suppliers also likely to have to lay-off staff - somewhat ironic when one considers the efforts of the FIA and Liberty Media to save the 405 jobs at Force India.

To add to the problem, with Wolff admitting that his team is struggling to fill "top positions", one can assume that the highest paid roles, which in most other industries would be the first to be shed in times of trouble, would also be under threat.

However, these are also the people who most likely will make the biggest difference to a team - the design guru, the ace strategist - which means the teams would be far more reluctant to shed them, no doubt meaning that 'less important' roles would be dropped.

The bottom line is that the budget cap sends out a global signal that F1 teams aren't in the market to hire and will instead have to fire people in the years ahead, thereby making it even harder to attract people for those "top positions"