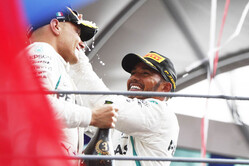 Mercedes driver Lewis Hamilton won the Italian Grand Prix from third on the grid, using a one-stop strategy and good tyre management. Hamilton started on the supersoft tyre - which on Saturday had been used to set the fastest lap in Formula 1 history, courtesy of Ferrari driver Kimi Raikkonen - before switching to the soft on lap 28.

After a contact with Vettel's Ferrari half a minute into the race, Hamilton got up to second on the first lap behind Raikkonen and was able to extend his first stint after his rival pitted for the soft tyres on lap 20. Even though he rejoined still behind Raikkonen, he could use his fresher tyres to close the gap and then managed them well before making a late overtake to claim victory, after the Ferrari driver experienced blistering on one of his well-used tyres. Vettel, in last position after lap 1 due to the collision with Hamilton, was able to recover to fourth place by the flag thanks to a supersoft-soft-supersoft two-stop strategy.

Following intermittent rain on Friday and Saturday, today's race was dry and warm - adding another unknown element to the strategy, in the absence of prolonged dry running up to this point.

Mario Isola: "Today's conditions presented a marked contrast to what had come before, which gave the teams another challenge as they had not run in similar conditions so far this weekend. Consequently they had to keep a flexible approach towards strategy, in the absence of solid data, but as it turned out the tyres were capable of a one-stop strategy when correctly managed - despite the intense demands of Monza, which resulted in the fastest lap in Formula 1 history yesterday. Lewis Hamilton managed his tyres perfectly and made the most of his later pit stop to make a great overtake near the end of the race."