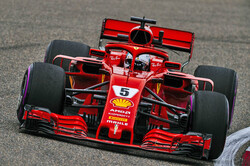 While Lewis Hamilton subsequently clarified his post-race comments in Spa, insisting that his reference to "tricks" was not an inference that the Italian team is cheating, though doubts over the total legality of the Maranello outfit's power unit's legality have swirled around the paddock for some time.

Despite the FIA's numerous assurances, following various investigations, the speculation continued, with the recent increase in form for the works team and its customers adding fuel to the fire.

"Obviously, the power unit is a complex element and it has been since 2014," he said. "The FIA is fully aware of our components and it is our duty as well each time FIA is not fully, let me say, convinced that there is something right or wrong for them to inspect, to understand better.

"I think it's simply what happens at the time there is some questions: we answer; we explain and I think that's what happens. That's it.

"The FIA certainly is happy," he added, "declaring our car legal at every single race, and on our side, honestly, fully happy at seeing the point is completely closed by them."

At a time, Lewis Hamilton and Mercedes are openly admitting that the German manufacturer's engine is no longer the standard, Binotto insists that his team's upturn in performance is not entirely engine related.

"I think we are thinking about the car as a full package, and not try to split down in terms of different components or units," he said, "because we are a team and what is running is not a power unit or a wing but a full car."

"So, again, all the effort was to build the team as a team and set the right objectives, deal with them, try to be ambitious. I think that's somehow what happened in the last two years."

"Race to race, there is always a variability of performance that is related to many, many aspects," added Aldo Costa, who left Ferrari for Mercedes and has recently moved to a consultancy role with the German team, "type of circuit, tyre management, key performance element of the car itself.

"So there is, for sure... when two cars are very, very close in terms of overall package, you will see anyway a variability.

"We see that Ferrari has done big progress in the power unit and we see that we have got two cars that are quite similar, both very competitive and it will be a matter of introducing more development, solving more issues and being at the end the best car, not making mistakes, having good reliability will be key because not many results can we lose without impacting the final result, really."