Arrivabene: Mercedes not used to pressure 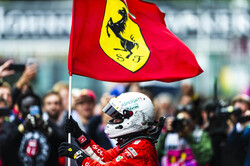 It was at Monza twelve months ago that it all began to fall apart for Ferrari, the Italian team taking a serious beating from Mercedes on home ground.

This time around however, buoyed by an emphatic win at Spa, the Maranello outfit heads to Monza, which has similar power demands, with renewed confidence.

Since the introduction of the hybrid formula at the start of 2014, Mercedes has won 68 of the 92 races, with Ferrari claiming 13 and Renault 11.

However, this year the German manufacturer has won 5 races compared to the 5 of Ferrari and 3 of Renault (Red Bull), clearly Mercedes domination is finally under serious threat.

Ahead of a vital race for his team, Arrivabene has warned Mercedes that its days are numbered.

"They are not used to it," he said. "In the last few years we were with our heads held low, we took punches right and left, but we always got up.

"We're used to it, they are not" he continued. "So the speech made to the boys is simple: let's keep them under pressure.

"Sooner or later, when we reach them, we are the aggressive ones who have taken the punches and we know how bad it is. Now it's time to give them."

However, mindful of last year, not to mention Mercedes back-to-back wins before the summer break, Arrivabene warned against complacency.

"It's a recovery but we're still behind," he admitted. "We have to put this in our heads that if you win a race, you have not won the championship, and that is our goal. We must put pressure on Mercedes, who are not accustomed to it."