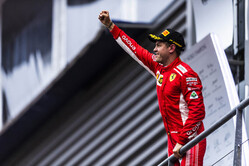 Maurizio Arrivabene: "That was a fantastic win today, with a great race from Seb and the whole team which, both at the track and back in Maranello, fought back from yesterday's difficulties in a strong, calm and determined manner, while the car showed all its potential. What happened to Kimi is a real shame and, but for that, we might have had even more to celebrate and the Constructors' classification would look a bit different. Now, the important thing is to carry on working with determination and humility, without ever giving up. Now we come to Monza and right from Wednesday, we will get the chance to get close to our fans during the event at Darsena di Milano. I am sure that will be able to count on the support of all our tifosi, as the championship goes on, getting more and more interesting. We hope that, come the end of the year, we can give them something to really smile about."

Sebastian Vettel: "I'm very happy because we had a great race, the car now has proved to be robust on all tracks and this weekend we got a little more power from the new engine, which I think also helped us down the straights. At the start I tried to stay close to Lewis, getting a good exit out of Turn 1 and then taking advantage of the slipstream to get past. After the Safety car pulled out, it was just the other way round, so I looked after the exit of Turn 1 to stay ahead. The first stint was very close, only a couple of seconds between us; but then the guys did a fantastic pit-stop, I could not believe the light had turned green so fast, and that gave our rivals no chance. The second stint was ore about managing the car and the tires for both of us. This is a great win for the whole team and hope in Monza it will be the same, but we need to keep fighting to be always up there."

Kimi Raikkonen: "I don't know what happened at the start: the only thing I know is that somebody hit me from behind and straight after that I got a puncture. I had a lot of damage to the rear wing endplate and the floor; at that point I could not go fast and the DRS stayed open all the times, it was hard to remain on track. It was pointless to continue, the damage was too big, so we decided to go back to the garage."