Vettel: There's still a lot of potential to unleash 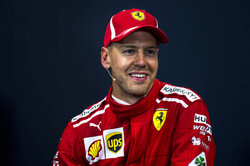 Earlier this week, Mercedes technical boss James Allison admitted that due to the characteristics of certain circuits suiting one car rather than the other, the championship is likely to continue yo-yoing for the remainder of the season.

While Ferrari and Sebastian Vettel had the early advantage, the title fight then swung in favour of Mercedes and Lewis Hamilton, though Red Bull has managed to spoil the party on a couple of occasions.

Heading into the summer break, Hamilton and Mercedes once again have the upper hand, Vettel not helping his cause when he threw away 25 guaranteed points in Germany.

However, upgrades introduced a few races back have seen Ferrari and its customer teams take a step forward, with Toto Wolff claiming the SF-71H had a five-tenths advantage on the straights at Hockenheim.

While Hamilton heads off on his summer break however, Vettel warns that the SF-71H still has plenty of potential to be unleashed.

"As we've seen this year the pendulum seems to swing once this side, once that side, obviously y'know if it's like this, consistency is the key," said the German. "Scoring points.

"I didn't do myself a favour last week," he admitted, "but I think it's part of racing. Stuff happens.

"Compared to last year, we lost the championship I think because our car wasn't quick enough to be a match in the final part of the season, despite what happened with the DNFs.

"So I hope that this year, and I think this year has shown so far that our car is more efficient, our car is stronger and still has a lot of potential to unleash - so I'm quite confident with what's sitting in the pipeline that we can improve. We'll see.

"(It) should be an exciting second part of the year."

With a 24-point lead in the championship, asked if he feels he already has a couple of fingers on the trophy, Hamilton was adamant: "Absolutely not. No," he replied.

"It's far too early," he continued, "you've seen the ups and downs we've had from this year, you've been ahead by some points and behind some points, ahead by a... But we have learned a lot.

"I don't believe there's ever a moment that you've got your hands on the title or the trophy. We've got a long, long way still to go and there's still nine or ten races... So a lot can happen moving forwards but what's really important is that we continue to keep up the pressure and keep working as we have done until now.

"There's nothing we really need to alter," he feels. "I think our work ethic has been very strong and the team morale is better than ever and the spirit is better than ever. We've just got to keep it up because as I said, we came here, we came to the last race, they kind of blew us away a little bit in qualifying, they would have done here had it been dry so we welcome the wet races, that's for sure. But yeah, I'm not really certain what to expect.

"We've got Singapore coming up; Singapore's another weak circuit for us so there are a few good ones and a few not so good ones ahead. It's important to capitalise on those difficult weekends such as this and I think that's really been a key strength of ours this year, we generally have come away with really good points at circuits which have generally been our weaker races but then we really need to capitalise on the races that we're really strong at like Silverstone for example which we did."