Four reserve drivers to take part in FP1 in Sochi 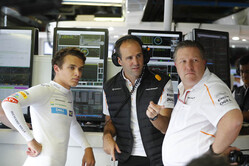 No less than four reserve drivers will be in action at Sochi this weekend in Friday's opening practice session.

At McLaren, Lando Norris will continue his preparations for 2019 when he makes his F1 race debut alongside Carlos Sainz as the Woking outfit fields an all-new driver line-up.

"Lando will once again drive in FP1 in Russia," confirmed the team's sporting director, Gil de Ferran, "which will be a busy weekend for him, as he combines his F1 duties with his F2 championship campaign. Nevertheless, this will hopefully be another positive step in his development."

Antonio Giovinazzi will be on duty for Sauber, as the Swiss outfit continues to ponder who will partner Kimi Raikkonen next season. Though the team's owners are understood to wish to continue with Marcus Ericsson, others within the team, and also at Ferrari, are seeking to place Giovinazzi in the second seat.

Artem Markelov will take over Carlos Sainz' car at Renault, though with both 2019 seats spoken for it is understood that Williams remains his only hope of an F1 seat if he is to move up from F2 after five seasons.

Finally, Nicholas Latifi will be in action for Racing Point Force India, the Canadian taking over Sergio Perez' car.

With Japan following a week later, all four drivers will need to be on their best behaviour with no silliness, as the busy schedule over the next five weeks means that teams can ill afford any serious damage.