Giovinazzi to partner Raikkonen at Sauber? 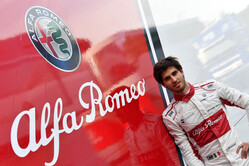 One of the most interesting bits of news to emerge in Singapore today is the revelation that Ferrari was not involved in Kimi Raikkonen's move to Sauber.

With Ferrari enjoying a close working relationship with the Swiss outfit, in terms of its engine supply and technology sharing, not forgetting that Alfa-Romeo sponsorship, it was widely assumed that the Italian company had engineered Raikkonen's move to Hinwil to ensure a smooth transfer for Charles Leclerc.

However, the news that Ferrari was not involved in the Iceman's comings and goings means that the Italian company could yet have a say in who drives for the Swiss outfit next season.

Consequently, the rumour doing the rounds is that Antonio Giovinazzi will partner Raikkonen, as Ferrari seeks to get its protege back on to the F1 grid.

Giovinazzi had two outings with Sauber in 2017 when he replaced the injured Pascal Wehrlein, though the Italian somewhat blotted his copybook when crashing out of the Chinese Grand Prix.

While the second Sauber seat is currently held by Marcus Ericsson, who has close ties to the Swiss outfit's owners, it is understood that in its efforts to move forward the team is looking to 'upgrade' its line-up.

To complicate the issue however, amidst talk that (Ferrari test driver) Daniil Kvyat could return to Toro Rosso, the Italian team would be loath to allow Giovinazzi to depart also, particularly as the Maranello outfit places much emphasis on its simulator work over Grand Prix weekends.

To further complicate things, changes to the Sauber board of directors in June saw Alessandro Alunni Bravi appointed to the board alongside team principal Fred Vasseur.

With Bravi manager to Stoffel Vandoorne and Robert Kubica, and Vasseur the Belgian's manager at ART when he won the GP2 title in 2015, it is entirely possible that the (soon to be former) McLaren driver could head to Hinwil.