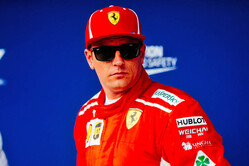 Ferrari has announced that Kimi Raikkonen will leave the team at the end of the season, though the Italian team has not revealed who will replace him.

"During these years, Kimi's contribution to the team, both as a driver and on account of his human qualities, has been fundamental," said team boss Maurizio Arrivabene. "He played a decisive role in the team's growth and was, at the same time, always a great team player.

"As a world champion for Scuderia Ferrari, he will always be part of the team's history and family. We thank Kimi for all of this and wish him and his family a prosperous future."

Before the start of the season it was widely anticipated that this would be the Finn's last year with the Maranello team and would be replaced by Charles Leclerc.

However, a number of strong performances from Raikkonen, coupled with the fact that some feel it is too soon for Leclerc to make the step up to Ferrari meant that many felt the Finn would be retained for another year.

However, over the Belgian and Italian Grands Prix weekends the rumours swung back in Leclerc's direction, with some claiming that this was the driving force behind Raikkonen pole winning lap at Monza and his refusal to yield to teammate Sebastian Vettel next day.

It is unclear if Raikkonen will retire, however, while the Finn insists he is still enjoying his racing he is still clearly competitive.

It is thought he could trade places with Leclerc and head to Sauber.