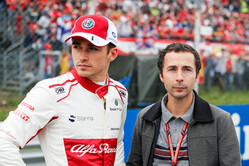 Thirty minutes after announcing that Kimi Raikkonen was to leave at season end, with Sauber subsequently revealing it had recruited the Finn for two years, Formula One's worst kept secret was finally out of the bag courtesy of the briefest of statements from Ferrari.

"Scuderia Ferrari announces that in the next Formula One racing season, Charles Leclerc will drive for the Team alongside Sebastian Vettel," it read.

Leclerc, a member of the Ferrari Driver Academy, and widely tipped as a potential world champion, has greatly impressed in his debut season with Sauber, regularly getting the car into Q2 and even Q3, while scoring points in a number of races including a superb drive to sixth in Azerbaijan.

Though for a while it looked as though he might continue to serve his F1 apprenticeship at Sauber or even move up to Haas, speculation that he was to replace Kimi Raikkonen at Ferrari began to build over the Belgian Grand Prix weekend.

A week later, as if to rubber stamp the speculation, the youngster was seen being embraced by FIA president Jean Todt and his partner Michelle Yeoh, on the Monza grid, Nicolas Todt being Leclerc's manager and having guided him through much of his career, which included winning the GP3 and F2 titles in successive seasons.

"Dreams do come true..." tweeted Leclerc shortly after the announcement, "I'll be driving for Ferrari for the 2019 Formula 1 World Championship. I will be eternally grateful to Ferrari for the opportunity given. To Nicolas Todt for supporting me since 2011. To my family. To a person that is not part of this world any more but to whom I owe everything of what is happening to me, Papa. To Jules, thank you for all the things you learnt me, we will never forget you, and to all the persons that supported me and believed in me.

"I will work harder than ever to not disappoint you," he added. "But first, there is a season to finish with an amazing team that gave me the opportunity to fight and show my potential. Let's go Sauber."

"It has been a great pleasure to support Charles Leclerc in his rookie year in Formula One," said Sauber team boss Frederic Vasseur. "Since his arrival, he has given the team great motivation. We have constantly improved and we will work hard until the end of this season to achieve the best possible results together.

"We are aware of Charles' talent and are confident that he will have a bright future. We will keep on following him closely and we wish him the best on his path."