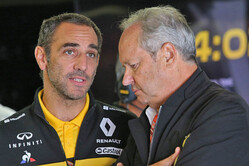 Cyril Abiteboul, Renault Sport Racing Managing Director: We left Singapore with a modicum of satisfaction. We were pleased to have been able to secure our first double points finish of the second half of the year, and to see the successful implementation of more aero and mechanical upgrades. Both Enstone, Viry and the track team worked well together to successfully translate the performance gains seen in the data. As a result, we were able to extend our slender advantage in fourth position in the Constructors' Championship.

We aim to keep this momentum going in Russia. We have some further upgrades and mechanical tweaks we hope to give some further stability. Singapore has confirmed once again how tight the competition is at the moment as well as the competitiveness of the top teams - even at circuits we expect to play to our strengths. We need to keep pushing in every area and take points when we can as we know our adversaries will do the same.

Five points in Singapore saw the team extend their advantage in fourth place in the Constructors' Championship as the 2018 season enters its final six races. Chassis Technical Director Nick Chester discusses the Sochi Autodrom and the mood in the Enstone camp, as every detail counts in the fight for fourth.

What's there to say about the Sochi Autodrom?
Nick Chester: It's quite an interesting mix. The tarmac is quite smooth which means it can be quite difficult to generate enough grip, so getting the tyres working properly can be a challenge. You need a medium to high level of downforce, but there are some straights as well so you can't put too much wing on or you'll suffer on the straights. It's quite a big power track as the straights are quite reasonable in length and that requires a lot of acceleration. The trick is trying to get the car working on the smooth tarmac, generating a good level of grip as well as getting the car well balanced for the numerous traction events for stability into corners with good traction out whilst managing the understeer in the middle. There's plenty to consider!

Are you looking forward to seeing Artem Markelov in the car for FP1?
NC: Artem is doing well in Formula 2 and he's had some very good results. He deserves this opportunity, so it will be interesting to see what he can do in the car. He's been a positive addition to the team in his role so far this season. He makes a solid contribution to what we're doing.

What's the verdict on the tyre choice for Sochi?
NC: It's tricky as the step with the Hypersoft, compared to the other compounds, is interesting. It's a lot quicker over one lap than the other tyres, but you do get the degradation. In Sochi, it will be run for qualifying, which will mean the majority of the top ten will have to start with it and drivers will be trying to manage it in the race. It might be a little bit easier to manage the degradation in Sochi because the tarmac is smooth and might not give the tyres such a hard time.

Are there any upgrades for Sochi?
NC: We have floor updates for Sochi; this is an evolution from the update we saw in Spa and this should give us a small gain. We ran updated bargeboards and sidepod vanes in Singapore and they behaved as expected, so we will use these again in Russia.

What's the post-Singapore feeling?
NC: It was good to get a double-points finish; we've been due one for a while. Carlos drove a really solid race. He was helped a bit by not starting on the Hypersofts, but he did the perfect job to come back to eighth. Nico was caught at the start, but drove really well after that and ran a good, long stint. It's another five points and we're edging ahead in fourth, which is important.