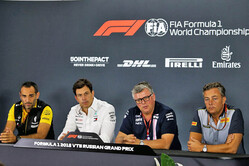 Toto, third and fourth for your team in FP1 today but you're unbeaten at this circuit, have won every Russian Grand Prix so far - so are you the favourites heading into this weekend's race?
Toto Wolff: No. I never see ourselves as favourites. We were beaten in qualifying last year and Valtteri had a really brilliant started, towed the Ferraris and went into the lead. And how the season has been going this year, first of all, there's no patterns any more, and I don't want to put us in a favourite position, let's see where we are tomorrow after qualifying.

Off-track we had another driver line-up confirmed today with Haas confirming its line-up. Is there any news concerning your young drivers, Esteban Ocon and George Russell?
TW: No, not yet. We are still working on the alternatives, the remaining alternatives. I don't expect there to be any news in the next week. We need to see how it all pans out at Williams and what we plan to do with Esteban long term and come up with a decision.

Otmar, speaking of Esteban. He was involved in that first-lap clash with Sergio in Singapore. Has there been any talks with the drivers since then? What's the latest in terms of what they can do, in terms of racing each other?
Otmar Szafnauer: Yeah, that was an unfortunate incident. We definitely spoke with them after. We analysed what happened and we'll be speaking with them this weekend as well.

And what is going to be the protocol for your drivers going into races?
OS: It's going to be no different to how it's been - it's just I think they forgot, so we're going to remind them that they have to give each other enough room, especially on lap one and even leave margin for error. So, if something does happen, they don't run into each other. We'll remind them of that and show them how that can be done.

You're making those calls as team principal now of Force India and you've been in that role for three races. Having got a good view of the picture of the team now, what do you think is a realistic target for the rest of the season?
OS: Well, if we continue to do a good job and don't crash into each other, I think realistically we should be targeting at least sixth in the Constructors' Championship, which is attainable but not easy to do. I think above that it will take some luck on our part or some misfortune on somebody else's part.

Cyril, Otmar almost rules himself out of the fight for fourth place - but who are your main threats for that fourth position, going into the rest of the season?
Cyril Abiteboul: Well, I think there is no real change in relation to that. Haas, since the season start, since the pre-season tests, has been really quick, fast but couldn't really crystalize that pace advantage in the early part of the season. They would be our fiercest competitors but, as Otmar is saying, they are coming back very quickly in the Constructors' Championship. They're quick, very quick on one lap. I think our car is still very competitive in race trim but we know we're suffering a disadvantage in qualifying, which is obviously playing a very big role in our capacity to maintain our fourth position. So, it's all about defending on Sunday what sometimes we're not capable of doing on Saturday.

Your team ran Artem Markelov in the first practice session today, continuing the momentum of Russian drivers coming into Formula One. How do you rate Artem and his performance?
CA: I think he's done a very good job this morning. He's not made any mistakes, first and foremost and we had a number of new parts on the car, so we would not have wanted to lose those parts, obviously. Good also on the procedures, and God knows there is a lot in terms of engine, aero test and so on and so forth. In pace, he was very decent, more than decent, I should say. Eight-tenths off Nico, obviously who's got a great track record of being able to extract maximum performance, in particular from the softest compound we have this weekend: the hypersoft. I think Artem struggled a little bit by degradation of the tyres. That's an area where he needs to work and learn - but I guess an interesting referential point for his future hopefully.

Mario, moving on to you. Cyril referenced the tyres there. We've got a step in the compounds, with the soft, ultrasoft and hypersoft but with a very smooth circuit here, what does it do for the strategic options at this track?
Mario Isola: We decided to nominate the hypersoft here because it is a smooth track but with some characteristics you need traction, especially for Sector Three, you need a strong tyre, especially the front for Turn Three, that is a very demanding corner. Then it is up to them to find the right setup of the car to preserve the tyres. We know that it is an aggressive choice, same choice as Singapore but with completely different characteristics of the circuit. Therefore I can imagine they will manage the tyres during the race. This is something that is happening since the beginning of the year. It's a sort of reaction from the teams to our decision to go softer and with more degrading tyres, and we will see. This morning, FP1, I believe was not really representative, considering that we had a lot of track evolution - so probably in the afternoon we have a better picture of delta performance and the level of degradation.

Pirelli has also been busy since the Singapore Grand Prix doing testing at Paul Ricard, looking ahead to 2019. So just how are preparations going for next season?
MI: The test was very good. We had Ferrari, Mercedes and we were able to complete all the programme, so the construction is now decided, so we are supplying all the data for the new construction to the teams by the 1st of October - that is the deadline. We are working on some fine tuning of the compounds, because the target for next year is to nominate five compounds. The target is five compounds. We may need to homologate an extra compound, so six, but hopefully we stay on five. That means that we will provide all five compounds with the new construction in Abu Dhabi at the test that is planned for after the race, similar to last year, to give the teams the opportunity to have an idea of the 2019 product.

(Frederic Ferret - L'Equipe) Question to Otmar, Toto and Cyril. What are your thoughts about Russian companies investing in Formula One and motor racing and supporting Russian drivers?
OS: We travel all over the world and it's great to see many nations supporting their drivers. I think it's natural that companies will support Russian drivers. I think it's good for the sport.

TW: Yeah, we're seeing more Russian kids coming through the ranks. You can see them in go-karting. And if you look at even the small classes, the Bambini and the Juniors, there is more Russian kids inspired by Vitaly and all the ones that came early, and I think it's good to have a mixture.

And Cyril, your thoughts, especially just having run a Russian driver in FP1.
CA: We have. And in addition to that, Renault has a very strong footprint in Russia. Russia might become one of the biggest and more important markets in the future mid-term plan of Renault, so it's clearly a market that's key for the future of the brand but there is no reason not to be also on the development path for Formula One. I guess for the rest it's not really for us comment on any political aspects that goes a bit above this room frankly.

(Andrea Cremonesi - La Gazzetta dello Sport) Question for Cyril. I would like to know exactly what was the issue with the engine for Red Bull and McLaren and why did you decide to change the engines for those teams here. And for Toto, I would like to know if something changes in 2019 with the passage between Zetsche and Kallenius?
CA: Yeah, engine changes, lots of things said and written about that. Reality is a bit more straightforward. It's simply the execution of a plan previously agreed with all stakeholders. In particular, with Red Bull. We had a driveability issue in Singapore in FP1, early into the weekend and, to a far less extent, in qualifying. But I think we have a very demanding user in the person of Max, and not very quiet also. But I think the team has done a great job in order to provide Max what was needed in order to have a good weekend in Singapore, it's very clear. As far as the introduction of the previous-spec engine is concerned, again, that was part of the plan. The C-spec as we call it, is a good step, I think it is a good step that everyone recognises, that Red Bull has a clear step in power that comes also with a certain number of limitations. That was part of the plan to introduce, at a later stage, a B-spec. It's a bit unusual in terms of pattern - but again it's a pattern and a plan that was fully agreed, specifically on the request of Red Bull.

And Toto, your comments on the changes at Mercedes next year.
TW: Yes. Dieter and Ola Kallenius have been strong supporters of Formula One all these years. Ola has been on the board of the team since a long time, has been running Mercedes High Performance Engines before, and was the managing director of AMG. So, we have a very good relationship with the two of them and Dieter is not leaving, he's just taking a cool-off period and coming back into the supervisory board and Ola, obviously, as the new CEO provides stability for our Formula One project.

(Phil Duncan - PA) Toto, we've seen Lewis has arrived here off the back of two very impressive performances in Singapore and Italy. I just wondered if you could provide some insights into why you think he's performing so well at the most and do you think this is the most complete and best Lewis that we have seen?
TW: He's certainly performing on a very high level. Singapore was definitely one of the best race weekends I've seen from him. I think he's just in a good place. It's been a while that we work together in Formula 1, that he's been part of the team, and he's become a very solid and reliable pillar within the team and in the car's development. And generally, I think, without wanting to go into too much detail I think he is in a good place in his life and he enjoys racing. He enjoys the activities outside of racing and give him a good car and then he's able to perform on a level that is unseen.