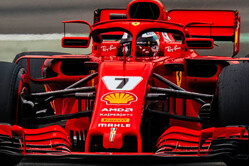 Be it sour grapes at the realisation that its reign is coming to an end, Mercedes remains dubious as to how Ferrari has not only caught up with it but is now regularly showing a clean pair of heels - Toto Wolff claiming the red cars were half-a-second quicker on the straights in Germany.

Like its rivals, Ferrari recently introduced an engine upgrade, however, unlike its rivals it appears to have made a significant difference.

Along with the obvious increased pace Sebastian Vettel and Kimi Raikkonen are enjoying, the Haas now appears to be best of the rest - even if the American outfit isn't making the most of its new found advantage in terms of points - and Charles Leclerc is regularly getting the Sauber into Q3.

The FIA, following doubts cast on the engine even before the upgrade, has regularly checked the unit, and reports that it is satisfied, but still the likes of Mercedes and Renault are unhappy.

"We know we have a power deficit, which up until now was against Mercedes," Cyril Abiteboul told Motorsport.com. "They are still here but we see indeed that Ferrari has taken the upper hand, so congratulations to Ferrari in that battle, which is more a technical battle, but less visible. The step that they have done is amazing.

"It's a step that they have done to a certain degree that does not go with a hardware introduction," he added, "it's also a step that we see across all three teams, not just Ferrari, which is not necessarily a battle for us, but also Haas and Sauber, which are more of a battle for us.

"Clearly we are scratching our heads, because we look in particular at the GPS profile, and we see indeed that it's really strange what they are doing," he admitted. "But doing something strange doesn't mean that it's illegal. I think we must give credit to what they have done, and that should be an extra commitment to work harder, and try and do the same step on our side."

Only yesterday, speaking in Germany, Toto Wolff admitted his concern, albeit in the most roundabout of ways.

"What we've seen is that on racetracks that should have suited us - Silverstone and Hockenheim - they had a car that was very good on the chassis side and a power unit that was the benchmark in the field," he continued. "The only reaction we can have to that is not to say 'What are they doing?' but the reaction should be 'What can we do in order to accelerate our own development program?'.

"My mind-set is really that everybody is respecting the integrity (of the regulations) because that is the only way we can go racing. If you doubt that, then the whole sport would have a problem, and I don't."

However, the FIA's race director, Charlie Whiting insists that the Italian team is not doing anything outside the rules.

"We are entirely satisfied with everything on that front, as we said in Monaco," he said, according to Motorsport.com. "Some teams have been asking further question and we were just there to try and help them have some peace, if you like."

Though it is not clear, it is thought Ferrari's hybrid system includes twin batteries as opposed to just one, whereby one is harvesting energy as the other is delivering.

Asked if Mercedes is seriously questioning the system's legality or in fact seeking information for its own development, Whiting replied: "Those discussions are private. I don't think I should be telling you.