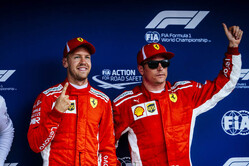 Having claimed that Ferrari had a five-tenths advantage over Mercedes on the straights at Hockenheim, Toto Wolff has come close to suggesting that the recent improvement from the Italian team and its customer teams is due to exploiting an area of the regulations that the FIA is unable to police.

Speaking at an AMG media event in Germany, the Austrian, doing his best not to make a direct accusation, made it clear that he has severe doubts about the legality of his rival's engine.

"What we've seen is that on racetracks that should have suited us - Silverstone and Hockenheim - they had a car that was very good on the chassis side and a power unit that was the benchmark in the field," he continued. "The only reaction we can have to that is not to say 'What are they doing?' but the reaction should be 'What can we do in order to accelerate our own development program?'.

"My mind-set is really that everybody is respecting the integrity (of the regulations) because that is the only way we can go racing. If you doubt that, then the whole sport would have a problem, and I don't."

Though the FIA has given the Ferrari unit the all-clear, there remains concern among the rival manufacturers that the Italian company has somehow found a performance gain related to the hybrid system, the increase in performance for both the works and customer teams following the introduction of an upgraded MGU-Ks and energy store.