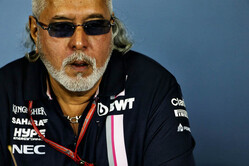 At a time Force India is said to be considering allowing Esteban Ocon to move to Renault for 2019, it is claimed that uncertainty over the Silverstone-based outfit's future has essentially brought the annual game of 'who goes where' musical chairs to an abrupt halt.

Last week saw Mercedes confirm both its drivers for 2019, while it is understood that Daniel Ricciardo has already agreed to remain with Red Bull, the official confirmation expected this weekend in Hungary.

However, at a time other teams and drivers were hoping to finalise their plans ahead of the summer break, a report in the German media suggests that all else is on hold until the future of Force India becomes clear.

Auto Motor und Sport reports that Force India is about to go into administration, the German publication suggesting the team is seeking an American Chapter 11 model which would see the team continue but in different hands.

Though claims that Rich Energy was seeking to buy the team have been dismissed by Vijay Mallya, speaking at Silverstone he admitted that he is open to offers, even if his cars are not sporting 'for sale' signs.

While it is claimed that Force India and Renault have already agreed terms for Ocon, a new owner at the Silverstone-based team, especially if it's Stroll, would see the driver market go into overdrive.

However, Auto Motor und Sport initially claimed that Force India would go into administration as early as yesterday, though the German publication still suggests it will happen ahead of Hungary.

On the other hand, having been in the spotlight for all the wrong reasons of late, Mallya might opt to get things underway once the summer break begins and attention turns away from the paddock.

Other than the driver market, the uncertainty at Force India is compromising the team's ambitions for this season whilst also stifling work on next year's car, a situation that would benefit from the investment of the likes of Stroll.