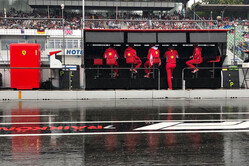 Ahead of today's sole practice session the air temperature is 20 degrees C, while the track temperature is 25 degrees. As expected, conditions are entirely different to yesterday, and following heavy overnight rain, though it stopped a little earlier, around ten minutes before the start of the session it started to fall again.

Further downpours are expected throughout the day, and whereas it was initially thought that Sunday would be dry and hot, there is now talk of rain in the afternoon also.

Red Bull topped the timesheets in both sessions yesterday, but it was a far from trouble-free day for the Austrian team.

Daniel Ricciardo was quickest in the morning, however, strategic grid penalties that will see him start from the back on Sunday meant that in the afternoon he focussed on his race preparations aware that today's qualifying session will serve little purpose.

Teammate Max Verstappen was quickest in the afternoon, but lost significant track-time due to an oil leak.

Nonetheless, the Bulls are looking a lot stronger here than anticipated, the RB14 clearly at its best in the first and final sectors.

Mercedes and Ferrari look well-matched as ever, and while qualifying should see their various engine modes leave Red Bull in their wake, on race pace Sebastian Vettel looked particularly strong. That said, it was noticeable that the German suffered quite severe blistering to his rear tyres.

As has become the norm over recent race weekends Haas was best of the rest, with Charles Leclerc also looking very, very good in the Sauber.

Renault and Force India look well matched, with both teams relying on a raft of new updates as they battle for supremacy in an increasingly unpredictable midfield.

While Williams is encouraged by the new front wing it is running in a bid to improve balance, at McLaren, Stoffel Vandoorne declared yesterday to be the worst Friday in his entire racing career.

To add to the weather conundrum the drivers are limited in terms of Intermediate tyres which means there will be limited running.

And in a further twist, there is talk that Hamilton has been taken ill.

The lights go green and Ericsson is first out, followed by Grosjean, both on the full wets.

As Hartley heads out he is minded that he has new brakes.

As more drivers head out, Hulkenberg is the first to try the Inters.

Unsurprisingly, a number of drivers are having difficulty keeping to the black stuff, while Verstappen almost collects Alonso who exits his garage as the Red Bull is heading down the pitlane.

Most complete one or two exploratory laps before heading back to the comfort of their garages.

Ten minutes in and all but the Ferraris, Mercedes, Panthers and Sainz have been out.

Hulkenberg is back on track having sensibly decided to ditch the Inters for full wets. With much of the track fairly flat there is a fair amount of standing water.

Hulkenberg posts the first time of the day, crossing the line at 36.873.

A big spin for Sainz at T10 after the Spaniard finds some of that standing water.

As the rain increases in intensity, silence falls over the pitlane as Renault's Cyril Abiteboul admits that conditions are too unsafe to risk running.

"This might end up being something of a quiet session as teams and drivers won't want to take any risks with qualifying coming up so soon," admits Pirelli. "Yes, you can gain some extra knowledge by running in these conditions... but you can also crash the car!"

As the session drags on and on with no running, even though one can appreciate the potential damage to the cars - and the lack of tyres - this will do little to convince fans to make the trip to the circuit tomorrow should the conditions continue. Possibly the final nail in the German Grand Prix' coffin.

Talking of bums on seats... throughout it all, the majority of drivers have remained seated in their cars.

With ten minutes remaining an engine fires up and moments later Sirotkin heads out. The rain has eased a little supposedly, but it is still very, very wet.

"Assess the conditions, don't take any risks," the Russian is told.

Leclerc and Ericsson also head out.

Sirotkin posts 37.644 as teammate Stroll heads down the pitlane.

Leclerc improves to 36.447 as Raikkonen and Bottas head out. Indeed, Hamilton is climbing into his car also.

As Gasly spins in T8, clearly revelling in the conditions Vettel posts 35.573 to go quickest. However, on his next lap the German spins at the hairpin having run out of road.

Hamilton does indeed head out, but like most it is merely an exploratory lap.

Meanwhile, Sirotkin goes quickest (35.334), ahead of Ericsson and Vettel.

"I have to slow down, I cannot see anything," admits the Finn.