Hulkenberg and Vettel fear for future of German GP 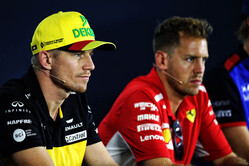 With no contract for a race after this year, Nico Hulkenberg and Sebastian Vettel fear for future of F1 in their country.

With the Nurburgring having cried off F1, having finally, like Silverstone, noticed the (hosting fee) elephant in the room, the duty of hosting Germany's round of the world championship fell to Hockenheim, albeit on a biennial basis.

However, with the circuit out of contract after this year's race, and no sign of a new deal with Formula One Management, there are fears that Germany is about to slip from the calendar... Germany, the country that gave us Schumacher, Rosberg, Vettel, Mercedes and so much more... a country that has only failed to host a round of the championship six times since its inception in 1950.

"It would be a big shame," said Nico Hulkenberg, "Germany being the car nation that we are. To not have a Grand Prix would be disappointing and sad.

"I guess it comes down to commercial questions," he added, in a masterpiece of understatement. "Germany has a very big history in racing, in Formula One in particular, maybe the nation is a little bit full, or tired... it's been around for decades, with Michael, with Mercedes, Seb, Nico... I think Germans are a bit spoiled because we've always been successful. Ultimately, I feel the commercial aspect has played the biggest part."

"It would be a shame to lose the Grand Prix because it has so much history," added Vettel. "Like Nico said, we are a car nation...

"Nico made a very valid point," he added. "It is normal if something happens for the first time there is a lot of excitement. Michael was the one who kicked off F1 and made it popular in Germany.

"In the UK, it is different, they invented it maybe, they always had great racing drivers, whatever the era.

"Michael was the one who had that boom and since then it's great for Germany to have German drivers. There was time when we had a lot of German drivers and now it is only Nico and myself.

"It is probably true that in general the Germans are a little bit difficult to get excited," he admitted. "I hope that because of the fact we failed in football this year people saved a bit of money on barbecues and can come here and spend some money. The weather is supposed to be great."