Vettel: We must keep improving the car 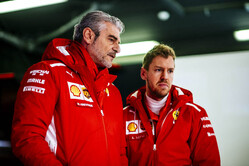 At a time the sport's powers-that-be are seeking to introduce a cost cap for the 2021 season, 2018 is likely to see the development 'arms race' continue until the final round in Abu Dhabi in November.

Though Ferrari currently has the edge in both championships, helped largely by Mercedes double DNF in Austria, the Italian manufacturer is aware that its German rival will continue developing its package as it seeks to defend its fifth successive titles.

Mercedes introduced its much anticipated engine upgrade a race later than Ferrari, while both are relentlessly pursuing upgrades to their cars, Silverstone witnessing a new floor and diffuser that appeared to pay off for the Maranello outfit.

However, as he seeks to end Mercedes and Lewis Hamilton's domination of the sport, and take his fifth title, Sebastian Vettel warns that his team's seemingly relentless development programme must continue until the bitter end.

While much is being made of Hockenheim being (Brackley-based) Mercedes home turf, it will be home also for Vettel who will be looking to extend his 8 point lead in the championship.