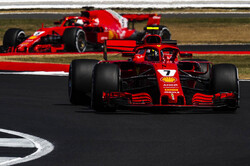 Summer is at its peak in Silverstone and today track temperatures topped 50 degrees in the heat of the afternoon during P2. These unusual - at least for Silverstone - conditions, though, seemed to suit the characteristics of the SF71H very well, proven by the fact it came out on top of the time sheets, while proving strong on race pace. Nevertheless, it's only Friday and both Seb and Kimi are aware of the work the team has to do in preparation for tomorrow's qualifying session.

Sebastian Vettel: The situation is difficult to judge, because we haven't seen much today and mostly collected data, and also because time is limited between the two sessions. But the important thing is that we had a good Friday, everything we put on the car seemed to work, and I felt happy with the balance of the car straight away and managed to find a good rhythm from the beginning. There has been a lot of talk about the third DRS zone: it may be easier to drop the wing for us than for smaller teams, whose cars have probably less downforce, anyway we'll see what happens in the race. I believe that most of the difference today is due to the new asphalt and... the amazing English summer!

Kimi Raikkonen: It was a very normal Friday" commented Kimi "We have been trying different things and solutions and learning as much as we could. For sure there's still some work to be done, but so far everything is ok. The resurfacing of the track made it a bit bumpy, in a few small spots, but all the time you feel it chattering all around the track. It's a bit funny, but in the end it's better than it used to be. This track has many nice parts and the grip has increased with the new tarmac. I don't know if the new DRS zone is creating overtaking opportunities: I think it depends on what your car can or can't do. I closed the wing during practice, I think it's too tricky to keep it open and it doesn't really make a big difference in lap time. Now we'll see what we can do tomorrow.