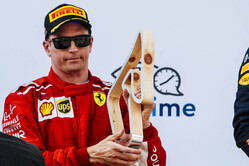 Maurizio Arrivabene: The real story today is that there are six Ferrari power units in the top ten on the race result sheet. And, apart from that, we are leading both the Drivers' and Constructors' championships. Today's result was not ideal, but it is definitely useful. The team did a great job, at every level, to make up for a difficult Saturday. During the race, the handling of the car, the perfect management of the tyres, the strategy and reliability, all made the difference. On paper, next weekend at Silverstone looks difficult for us, partly because it's a home race for our main rivals. But we will tackle it with our usual level headedness and determination.

Kimi Raikkonen: At the start I had a good getaway, but I found myself between two cars and I had to lift off to avoid them squeezing me, while I hoped they would see me. I lost momentum, speed and the chance to challenge them in the first corner. It's a pity, because without that, I think I could have been in the lead. The first lap was quite hectic, then the situation calmed down for a while. Tyre management played a big part today: it was hard to know when to go flat out and be on the safe side at the same time. The beginning of both stints was a bit tricky; we struggled a bit to get the grip and to make the tyres work, but then it got better and in the end we had very good tyre. We were obviously hoping to catch Max, but by then it was perhaps a bit too late. Today we had the speed, but there just weren't enough laps left in the race... Of course we wanted to win, we tried very hard, giving our best, but it was not enough. The good thing is that, as a team, we did a solid job. It was a strong weekend.

Sebastian Vettel: We did a good job and a good race. I had a very solid start, but in Turn 1 things got a bit messy. I tried to recover, but there was no room and lost some positions in Turn 3. From them on, I had to fight with Renault and Haas and lost some time. However, the car was very good, we had a very good pace and we didn't have any issues with the tyres; in fact, the car was very good on them, even if I had to manage the Softs for a long stint, which again proves we have made good progress since Barcelona. Obviously, I am happy with the points that we've got and the podium, but I am not satisfied 100 per cent, because I think there would have been more up for grabs today, if I hadn't got the penalty. We were the only cars that could be there with the Mercedes in terms of pace, but in the end, we proved more consistent.