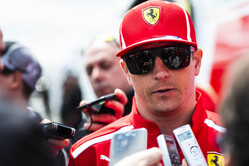 Third and fourth place for Seb and Kimi on tomorrow's starting grid had been the result of a tense qualifying session for the Austrian Grand Prix. However, Seb involuntarily impeded Carlo Sainz in the Renault during Q2 and the Stewards imposed a three place grid penalty on the Ferrari driver. It means that Kimi is promoted to P3 on the grid.

Kimi Raikkonen: Obviously, it's not the ideal result, but it's a rather decent one. It has been a pretty straightforward and consistent day. I struggled a little bit with understeer in the last few corners to get the car to turn and carry the speed into the corner, but apart from that it was ok. For sure there are always things to improve and you can always go faster; today we did our best, but it was not enough. Tomorrow is a different day, we know that sometimes qualifying is different from the race. We'll start on different tires to our competitors, so it will be interesting to see how it pans out. This is quite a special circuit, lap time is very short so we expect everybody to be very close. As for overtaking, it's supposed to be easier with an additional DRS zone. Let's hope we have a stronger day on Sunday.

Sebastian Vettel: I'm sorry for Carlos, it was never my intention to ruin his lap. You can't see well straight back in the mirrors, with the rear wing and everything, and this time I was not told that he was coming. As for my qualifying, I think I had another tenth in my pocket today, but probably not enough to become a threat. In my first run in Q3 I knew I had to ramp it up, so I pushed very hard and made a small mistake that turned into a big snap, so I tried to recover concentration for my last attempt, which is always difficult, and probably held something back a little bit. Now let's focus on the race tomorrow.