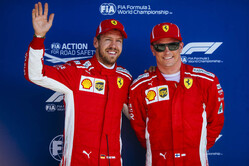 On a day in which five Ferrari engines made the cut into Q3, Scuderia Ferrari confirmed the solid performance already seen on Friday with Seb Vettel in P2 on tomorrow's grid with Kimi Raikkonen immediately behind him in third. The first three drivers are all within less than a tenth of a second on the 5.8 Km British track. Seb's result came under difficult circumstances, as he had to fight a neck problem which had troubled him since this morning in P3.

Sebastian Vettel: Today, the gap to Hamilton was only less than half a tenth, so my lap was almost the same as his. I was happy with my first attempt in Q3, but then on my last run I lost a lot of time on the straight. I don't know why it happened, otherwise pole would have been there. However, tomorrow we should be ok in the race. Also, the pain in my neck was not nice today, but it should be gone by tomorrow. Even if we couldn't beat Mercedes today for pole, we made big steps forward as a team, so I wish to congratulate the whole Scuderia because everybody, on track and at home, has done their best. The car is working well and we are faster than last year.

Kimi Raikkonen: "On my last run in Q3 I locked the front wheels a little bit on the second last corner and I definitely lost some time there. It's difficult to get the perfect lap together, for sure there's always room to improve, but this is what we have got today. So far it's been pretty ok with the car and the set-up and things have been running smoothly; let's hope that tomorrow is an even better day. Third position is not ideal but not too bad, either. It's impossible to know if the hot conditions will help us; yesterday we did some long runs and after that we had a rough idea, but on Sunday it's a different story and the conditions might be slightly different .Tomorrow we'll do our best and see where we end up. It's going to be a long race and it will be quite tricky for the tires. We'll try to make a good start and then make the right decisions.