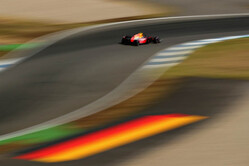 Ahead of today's second practice session the air temperature is 30 degrees C, while the track temperature is 47 degrees. It remains bright and sunny and hot.

Daniel Ricciardo was the pace-setter in this morning's session, the Australian finishing ahead of Lewis Hamilton, Max Verstappen and Sebastian Vettel.

However, other than the fact that Ricciardo will start from the back of the grid on Sunday having changed a number of engine components, while the leading three set their best times on the ultrasofts, Vettel was on softs. Indeed, the Ferrari drivers, along with the Toro Rosso pair and Charles Leclerc never ran the purple-banded rubber.

Other than a couple of offs and Antonio Giovinazzi shedding part of his engine cover there were no dramas as the team prepared for Sunday.

The development race continues at a frightening pace, with almost all the teams trying new parts, be it a new exhaust layout (Ferrari) or front wings (Force India and Renault).

Having handed over their cars for FP1, Esteban Ocon and Marcus Ericsson are back in action this afternoon.

The lights go green but it is a couple of minutes before a car heads out... it's Sainz.

As Sainz begins his flying lap he is joined by Stroll, Ericsson, Leclerc, Ocon, Grosjean and Magnussen.

The Monegasque is on mediums while the rest are mostly on softs.

Grosjean (medium) goes quickest with a 15.745 only to be leapfrogged by his soft-clad teammate who posts 14.898.

Magnussen and Alonso have a close encounter – the latest in a long series of issues involving the pair.

Vettel improves to 13.817 as Raikkonen encounters traffic and only manages a 26.802.

Thirteen minutes in and the Bulls and Mercedes have yet to appear.

Raikkonen improves to 13.915, now just 0.098s off his teammate's pace. However, while the Finn is on the softs, Vettel is on mediums.

Verstappen (softs) goes third with a 13.982, the Red Bull driver quickest in the first and final sectors.

Following a big, big lock-up, Hulkenberg reports a problem with his front tyre. "Is there a flat spot," he is asked. "Yes, a big one," he admits.

That said, the Australian finally heads out and his first flying lap sees him go sixth with a 14.682.

"Too much sliding, can I box?" asks Verstappen. "He is given the all-clear to pit.

Vettel switches to the ultrasofts, the first time he has tried them today, and immediately goes quickest by 0.046s. Elsewhere, a spin for Ricciardo at T8.

Leclerc has also switched to the purple-banded rubber, the Sauber driver currently an impressive ninth.

Raikkonen has also switched to ultras, as have the Toro Rosso pair.

Despite a mistake in the final sector which almost saw him lose the back end, Raikkonen goes third with a 13.427. Moments later Leclerc goes sixth with 14.572 only to be demoted when Magnussen improves to 14.189.

Finding that it is difficult to cool his tyres down, Raikkonen reveals that he will do two cool-down laps as opposed to one.

Despite a poor opening sector, a PB in S2 and very quick S3 sees Hamilton (ultras) go quickest with a 13.111. Bottas also improves on the ultra, the Finn stopping the clock at 13.190 go second.

A 13.085 sees Verstappen go top the Red Bull looking strong despite fears that it would struggle here, particularly in the first sector.

Sainz and Hulkenberg both reporting vibrations on the steering column while going straight, they are advised that this is most likely a balance issue. The pair are currently 9th (Hulkenberg) and 12th.

As attention shifts to race sims, it's: Verstappen, Hamilton, Bottas, Vettel, Raikkonen, Grosjean, Magnussen, Leclerc, Hulkenberg and Ocon. At the other end of the timesheet Alonso is seventeenth, ahead of Stroll, Sirotkin and Vandoorne.

At 206.3 mph Raikkonen is quickest through the speed-trap, ahead of Vettel, Perez, Ocon, Hartley, Leclerc, Hamilton and Sainz.

A bit of silliness at the hairpin as Sirotkin appear to let Ricciardo past only to shut the door at the last moment.

"What's going on with the engine," asks Verstappen, "on the downshift I hear a lot of noise."

On successive laps Hamilton goes wide, the Mercedes appearing to struggle for grip on its used ultras as the Briton's race sim is underway.

Following those "downshift" noises, Verstappen is out of his car and removing his helmet... which is never a good sign.

Sirotkin goes cross country at T13, throwing up a cloud of dust, gravel and then grass.

Magnussen reports that his grip is "very, very poor".

"These tyres are nearly finished," warns Hamilton. Subsequently he adds that his seat is "really hot".

On race pace Vettel is looking strong, well-matched with that of the Mercedes pair.

With ten minutes remaining all bar Verstappen are on track.

Told that he has ten laps remaining, Hulkenberg responds: "We're not going to make it."

"Is there something I can do in the second last corner," asks Raikkonen, the Finn complaining that his car feels unstable.

With five minutes remaining, Verstappen is back in the car and about to head out.

"I'm just wasting my energy out here, I'm not learning anything" says Hamilton. "We're definitely learning," he is told.