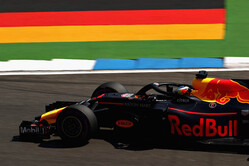 Ahead of today's opening session the air temperature is 26 degrees C, while the track temperature is 37 degrees. It is bright and sunny and already quite hot.

This morning's - not entirely unexpected - big news is that 24 hours after Lewis Hamilton signed on for another two years at Mercedes, Valtteri Bottas has also put his signature to a new contract, albeit for 2019 only. Though there is the option for 2020 also.

There are two reserve drivers on duty today, Nicholas Latifi at Force India and Antonio Giovinazzi at Sauber.

As was the case in Silverstone and Austria, there are three DRS zones, while Pirelli has once again opted to skip a compound, bringing the ultrasofts, softs and mediums.

With the lights still red, Ricciardo is ready and waiting at the end of the pitlane. With his team likely to run a number of new components this weekend, the Australian looks set to take a grid penalty.

The lights go green and the Australian heads out, followed by Giovinazzi, Vettel, Sirotkin and Gasly.

While most are on softs, Giovinazzi, Stroll and Latifi are on mediums while Ricciardo is on ultras.

Sirotkin complains of lots of air in his helmet.

As the championship - and thereby the development race - hots up after Silverstone, Vettel is running a new exhaust layout - featuring two small pipes in addition to the main - while Raikkonen is still running the old layout.

The development race isn't only about the 'big three', a number of teams are continuing to bring upgrades, not least Force India and Renault which both have new front wings.

Verstappen posts the first time of the day, the Dutch youngster - on mediums - crossing the line at 16.526.

Ten minutes in and all but the Mercedes and McLaren duos have been out.

As he improves to 15.334, Verstappen is advised that wind speeds are "very low".

Stroll has completed 5 laps but has yet to post a time as he and teammate Sirotkin carry out low-speed aero tests following their issues at Silverstone.

Twenty minutes into the session - on a track that hasn't seen F1 for two years - Gasly is the second driver to post a time (16.941). The Frenchman complains that his steering is pulling to the right.

As the Mercedes pair head out, Alonso remains the only no-show.

Sainz goes third (16.027) on the ultrasofts, the Renault pair having brought the full complement of ten sets.

Hamilton's first lap sees the world champion go third with a 15.940 as Bottas posts 16.125 and Magnussen 16.867, all three are on the softs. Verstappen remains quickest, on the mediums.

As Bottas improves to second with a 15.164, Raikkonen goes quickest in S1.

The cameras pick up on a large piece of bodywork on track - in fact, the left-hand engine cover - from Giovinazzi's Sauber.

Gasly still unhappy with the handling of his car, the youngster now complaining of vibrations on the straight.

Alonso has been out and completed an installation lap before returning to base. Vandoorne has also completed just one lap. Along with Giovinazzi they remain the only drivers still to post a time.

Still on the softs, Hamilton goes quickest with a 14.181, ahead of Ricciardo, Vettel, Bottas, Verstappen and Raikkonen. Perez is currently best of the rest, ahead of the Renault pair.

Meanwhile, it is confirmed that Ricciardo will start from the back of the grid after taking on a new MGU-K, Control Electronics and Energy Store, and though this will compromise his German Grand Prix it sets him up nicely for next week's race at the Hungaroring where Red Bull should be strong.

"The front left is getting cooked," warns Hulkenberg of his ultrasofts.

"The balance is really, really bad," complains Gasly. Asked if he wants to do another lap, the response is a resounding "no!"

At 40 minutes, there is the customary lull as the extra set of tyres is handed back.

Around eight minutes later, Hulkenberg fires up and heads out.

Now on the ultras, Bottas goes quickest in S1. He maintains a strong pace in S2, finally crossing the line at 13.903 to go quickest by 0.278, the previous best - having been posted by Hamilton - set on the softs.

On softs, Raikkonen posts 14.273 to go third, 0.370s off Bottas' best but only marginally off Hamilton's pace.

Back in the pits after setting a time (16.441), Alonso's McLaren is the focus of much work.

On the ultras, Verstappen goes quickest with a 13.714, the youngster clearly pushing to the very limit.

Now Hamilton heads out on the purple-banded rubber. Posting a PB in S1, he goes quickest in S2. At the line the world champion posts 13.529 to go quickest by 0.185s.

Both McLaren still in the garage, Vandoorne and Alonso having completed just 7 laps between them.

As he begins his qualifying simulation Leclerc is told to push. He responds saying that he cannot. When asked why, he responds: "I'll explain later". Clearly not for other ears.

For the second time, Hulkenberg goes very wide in the very fast T12, momentarily bringing out the yellow flags.

Vandoorne is back on track, the McLaren driver hopefully about to post his first time of the day. He crosses the line at 16.553, thereby remaining 20th.

Going quickest in the final sector, Ricciardo improves to second (13.699) on the ultras.

With the track ti himself, Ricciardo is running very, very slowly. However, he doesn't appear to have a problem, rather Red Bull appear to be testing or trying something. Indeed, the pace suggests the teams is trying to replicate safety car or VSC conditions.

The Australian subsequently ups the pace and in the process goes quickest with a 13.525.

Grosjean improves to seventh with a 14.691 as Haas claims the best of the rest position that has been its standard in recent races. With Leclerc 9th, the Ferrari customer teams continue to impress.

Bottas is warned that his front-left tyre temperature is "on the limit".

"Who was the Renault in front of me," demands Alonso after the Spaniard is held up. Told that it is Hulkenberg, the McLaren driver responds: "Amateur".

As the drivers continue their race sims, Ferrari, along with Toro Rosso and Leclerc are the only drivers that haven't used the ultrasofts.