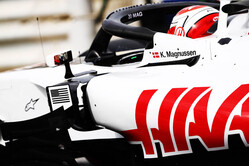 The sixth round of the 2018 FIA Formula One World Championship at the historic 3.337-kilometer (2.074-mile), 19-turn track was bound to be a difficult affair for the American squad after a disappointing qualifying performance on Saturday.

Grosjean started 18th and Magnussen was 19th for a race where the outcome is often determined in qualifying. Monaco's tight confines and lack of overtaking places a premium on qualifying, and for those forced to start near the rear of the field, the glitz and glamour of Monaco is non-existent.

Some race chaos and the attrition of others can help one move up the leaderboard, but both were in relatively short supply on Sunday.

The Williams duo of Sergey Sirotkin and Lance Stroll battled their own adversity at the onset of the race and found themselves 19th and 20th, respectively, pushing Grosjean to 18th. Magnussen got the jump on his teammate at the start and then managed his way past Stoffel Vandoorne when the McLaren driver pitted on lap 20, so he was able to rise to 16th.

When Fernando Alonso encountered trouble with his McLaren on lap 53, Magnussen moved to 15th and Grosjean inherited 17th. And then on lap 71 when Charles Leclerc's Sauber collided with Brenden Hartley's Toro Rosso in turn 10, Magnussen rose to 13th and Grosjean climbed to 15th.

Despite what they were up against, neither of the Haas F1 Team drivers threw in the towel. Both Magnussen and Grosjean began with the same strategy – one pit stop where they swapped their Pirelli P Zero Purple ultrasoft tires for Red supersofts, with the goal being to outlast those ahead of them on softer compounds that would, theoretically, wear out at a quicker rate and significantly drop their lap times and, perhaps, force a second pit stop. Grosjean pitted on lap 15, Magnussen on lap 17.

Grosjean made a second stop late in the race. With no one behind him capable of overtaking, Grosjean took advantage of the VSC (Virtual Safety Car) period that followed the Leclerc/Hartley crash, ducking into the pits on lap 68 for hypersofts. Magnussen stayed out and held onto his track position.

Six rounds into the 21-race Formula One schedule, Haas F1 Team is tied with Toro Rosso for seventh in the constructors' standings with19 points apiece, seven points behind sixth-place Force India with an eight-point advantage over Sauber, their nearest pursuer.

Romain Grosjean: "It was a tough race. We struggled and didn't have much pace. Unfortunately, with no crazy thing in the race, we were always going to be in a difficult position. I think we should have a good car in Canada."

Kevin Magnussen: "The car that we had this weekend is not representative of what we should have. I'm just glad we're out of here, and I can't wait to go to Montreal and get back into the fight. Everyone on the team deserves that. We're moving on. We're all looking forward to Canada and to putting some new parts on the car, getting back into our normal shape, and getting back in the fight for points."

Guenther Steiner: "In the end, this is what we had to expect. We got two cars home in 13th and 15th. There was not much more in it. There was no damage, we drove a solid race, and made up positions. Now we go onward and upward."