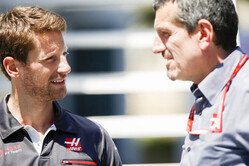 Grosjean set the 11th-fastest time in Q1 with a lap of 1:12.930 around the 3.337-kilometer (2.074-mile), 19-turn track to comfortably make the top-15 cutoff and advance to Q2. Magnussen was 19th quickest with a lap of 1:13.393. A local yellow flag in the final minutes of Q1 for Charles Leclerc's Sauber going deep at Sainte Devote (turn one) compromised Magnussen's last attempt at a quick lap.

Both Grosjean and Magnussen ran exclusively on the Pirelli P Zero Pink hypersoft tire throughout qualifying.

Before Grosjean, Magnussen and the rest of their Formula One counterparts participated in knockout qualifying, they had one final practice (FP3) to dial in their racecars for a quick lap around the track. The Haas F1 Team drivers ran a solitary installation lap on the Red supersoft tire before switching to the Pink hypersoft compound for timed laps.

Romain Grosjean: "Unfortunately, between FP2 and FP3, we didn't manage to get much more performance in the car. We knew qualifying was going to be difficult. I was pretty pleased to go into Q2 because that wasn't even in the planning, initially. I gave it all in Q1, and I knew I wouldn't have much more in Q2. I did improve my lap time, which is great, but everyone made a bigger step. It's been a difficult weekend. I think we can learn a lot from it. We just can't get any grip, but the balance of the car itself is pretty alright. Obviously it's Monaco, so nothing is finished until the checkered flag is down, thought it's not ideal for us to be starting 18th and 19th on the grid."

Kevin Magnussen: "It's been a bit of a shock this weekend, especially coming from last weekend being so good, so competitive, to being this uncompetitive, and really struggling for so many different reasons. It's not just tires not working or balance issues, it's just lacking pace this weekend. We can't seem to find it in any way. In a short space of time, we've tried a hell of a lot of things. It's not been easy."

Guenther Steiner: "Obviously, a disappointing qualifying for us, because this year we're used to doing better than this. We saw it coming on Thursday - we were not very competitive. Nevertheless, Monte Carlo is special. I think it doesn't show what the car is capable of at a normal track. Tomorrow, we do the best that we can. Maybe something strange happens and we get ourselves in a good position. Regardless, we still believe our car can do better than this in the races that follow."