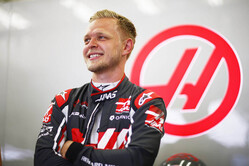 Haas F1 Team drivers Kevin Magnussen and Romain Grosjean earned strong starting positions for Sunday's Spanish Grand Prix by advancing to the final round of knockout qualifying Saturday at Circuit de Barcelona - Catalunya. The duo qualified seventh and 10th, respectively, as the American squad placed both its drivers into Q3 for only the third time in team history but second time this year.

Magnussen and Grosjean used the Pirelli P Zero Red supersoft tire in Q1 and then switched to the Yellow soft tire for Q2. They returned to supersofts in Q3, with the softest tire made available by Pirelli for the Spanish Grand Prix affording the most grip. Per the sporting regulations, both drivers will start the race on softs, as that is the compound they used to set their quick times in Q2.

Before Magnussen, Grosjean and the rest of their Formula One counterparts participated in knockout qualifying, they had one final practice (FP3) to dial in their racecars for a quick lap around the track. To emulate qualifying, both drivers ran exclusively on supersofts.

Romain Grosjean: "Pretty good qualifying for the team - both cars in the top-10. Obviously, Q3 could've been better and I'm not super happy to start P10 but, in general, I think we're in a good position for the race and I'm happy for the team."

Kevin Magnussen: "It was a really good qualifying. P7 for us is really pole position - it's the best you can hope for if you're not in a Ferrari, Mercedes or Red Bull. I'm really happy with that. I'm looking forward to tomorrow and, hopefully, we can bring home some good points. It's a good position to start, and again, P7 is probably the best we can hope for if everyone finishes. It's still a very tight battle, but I think our car is strong, and we can be happy with where we are at the moment. We need to keep up the levels, continue to develop, and keep putting stuff on the car."

Guenther Steiner: "A very good day today. Finishing seventh and 10th in qualifying is a very good position for tomorrow. So, we just have to bring it home. That's our aim - get two cars in the top-10."