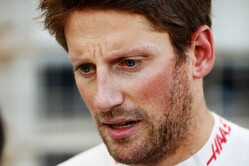 The tight and twisty Baku City Circuit created another action-packed Azerbaijan Grand Prix. With less than 10 laps remaining in Sunday's 51-lap contest around the 6.003-kilometer (3.730-mile), 20-turn track, Haas F1 Team was primed to take advantage of the chaos and score its first double-points finish of the season, as drivers Romain Grosjean and Kevin Magnussen were running sixth and 11th, respectively. Ultimately, Haas F1 Team became a part of the chaos, with Magnussen finishing 13th and Grosjean crashing out to earn 15th.

The result was not indicative of the effort put forth by the American squad, as Grosjean rallied from his 20th-place starting spot and Magnussen came from 15th on the grid.

Grosjean started last after a gearbox problem prevented him from posting a time in qualifying on Saturday. But from the drop of the green flag, Grosjean took advantage of others' miscues, rising to 13th as he deftly avoided numerous incidents amongst his Formula One brethren.

With plenty of debris on the track to clean up after the opening-lap skirmishes, the safety car was deployed, allowing Grosjean and Magnussen to duck into the pits. Grosjean swapped the Pirelli P Zero Yellow soft tires he started the race with for a set of Red supersofts. Magnussen did the opposite, ditching his softs for supersofts.

When the race restarted on lap six, Grosjean was 14th and Magnussen was 16th. A lap later, they were nose to tail in 14th and 15th.

Grosjean methodically worked his way forward, cracking the top-10 when Carlos Sainz Jr., pitted his Renault on lap 15. Grosjean then grabbed ninth when Lance Stroll brought his Williams in for service on lap 23, and eighth when Charles Leclerc wheeled his Sauber into the pits on lap 24.

Grosjean set his sights on the seventh-place Force India of Sergio Perez, and by lap 30, was just 1.3 seconds behind. And while Grosjean couldn't close the gap any further, it became a moot point when an accident between Red Bull teammates Max Verstappen and Daniel Ricciardo on lap 40 gifted sixth place to Grosjean. This incident also brought Magnussen to 11th.

The safety car appeared for a second time, and both Haas F1 Team drivers took advantage of the opportunity, darting into the pits with each pilot getting a new set of Purple ultrasofts that would take them to the finish. Shod on the softest and grippiest tire available to teams at Baku, Grosjean and Magnussen were poised to not just hold on to their positions, but improve them.

As Grosjean worked to build heat into his ultrasofts by weaving back-and-forth while under the safety car, his Haas VF-18 broke loose, pitching Grosjean into the outside wall. Grosjean was unhurt, but his racecar was not. Fifteenth would be his finishing position.

With Grosjean out of the race, Magnussen moved up to 10th, providing the chance for Haas F1 Team to still come away with points. But when the race returned to green on lap 48, Magnussen tangled with the Toro Rosso of Pierre Gasly, dropping him to 14th. Magnussen picked up 13th on the third-to-last lap when race leader Valtteri Bottas suffered a flat right-rear tire on his Mercedes, ending his race and what would've been his first win of the season and his first since last year's season finale in Abu Dhabi.

Four rounds into the 21-race Formula One schedule, Haas F1 Team is eighth in the constructors' standings with 11 points, just two points behind seventh-place Toro Rosso and one point ahead of ninth-place Sauber.

Romain Grosjean: "This hurts a lot and I want to apologize to the team. We were in the middle of an amazing race, starting last and running P6. Seeing (Sergio) Perez on the podium, knowing I was fighting with him, is very painful for all of us. It was going very well. The conditions were tricky, there was a lot of wind, the car was going left and right, pushing then not pushing. I was warming up my tires and bumped into a switch that I'd moved by two positions. When I touched the brakes, the brake balance was locked rearward - it just locked the rear wheels and I spun."

Kevin Magnussen: "Obviously, things aren't going our way at the moment. We still have a car that is performing well, so I'm looking forward to the rest of the season. We've got a competitive car that we can score points with, and on a regular basis if we have smooth weekends. I'm sure we'll be alright. It's just been a tough start to the season, especially when you see the potential in the car, it's even more frustrating. We'll come back from this. It was just a tough weekend overall."

Guenther Steiner: "A very disappointing finish to the weekend. There's nothing more to say."