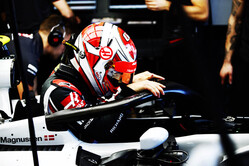 Magnussen set the seventh-fastest time in Q1 with a lap of 1:29.594 around the 5.412-kilometer (3.363-mile), 15-turn track to move on to Q2. Grosjean was 16th quickest with a lap of 1:30.530 and just missed cracking the top-15 to advance to Q2. In fact, Grosjean ran an identical lap time to 15th-quick Fernando Alonso of McLaren, but since Alonso set his quick time prior to Grosjean, Alonso was given the spot.

In Q2, Magnussen was again seventh quick. His fast lap of 1:29.623 allowed him to make the top-10 cutoff and advance into Q3 for the second straight event. Magnussen qualified sixth in the series' most recent race, the season-opening Australian Grand Prix March 25 at Melbourne Grand Prix Circuit.

Magnussen maintained his consistency in Q3 to qualify seventh with a lap of 1:29.358. And with fourth-place qualifier Lewis Hamilton incurring a five-place grid penalty for a gearbox change on his Mercedes, Magnussen will start sixth in the Bahrain Grand Prix.

Both Magnussen and Grosjean ran exclusively on the Pirelli P Zero Red supersoft tire throughout qualifying.

Before Magnussen, Grosjean and the rest of their Formula One counterparts participated in knockout qualifying, they had one final practice (FP3) to dial in their racecars for a quick lap around the track.

The Haas F1 Team drivers employed the same program in FP3, starting with an installation lap before a seven-lap drive on Yellow softs followed by a six-lap outing on Red supersofts. Grosjean set the 12th-fastest time with a 1:31.513 on his 11th lap. Magnussen earned his best time on his 12th lap - a 1:31.737 that put him 15th overall. Both pilots delivered their quick times on the grippier and subsequently faster supersoft tire.

Romain Grosjean: "I don't really know what happened. We had a very difficult out lap with a lot of traffic and just no grip. There's not much to say except that I had very little grip and couldn't do any better. We need to understand that, but I'm disappointed. We made a lot of changes last night, so I'm hoping that will pay off for our race pace tomorrow."

Kevin Magnussen: "It went well and I'm very happy with today. The tires here have been really difficult to switch on. You either don't switch them on or you overheat them. It's a very narrow window. To get that sorted for qualifying and find a good rhythm all the way through the session consistently - it felt good. I'm happy. It's a little bit annoying to see one car ahead by one-, two-hundredths of a second. You could always find a little more, but then so could they. I think we got everything out of it today. Our race pace still isn't a given, but it's looking good. It wasn't bad on Friday, so we're positive, but we're also aware those tires are pretty tricky, so we need to get them in the window, then we'll be fine."

Guenther Steiner: "It wasn't a great qualifying, but it was still a good one. We have proven again that the car is fast. Unfortunately - and it could only be us - that you miss Q2 with the same time to the guy that finished 15th. That bad luck will end, but we also need not to blame it on only being unlucky. Romain had a little bit of traffic, and he didn't get his tires to work on his out lap in that traffic. I think we're still in a strong position to score points with both cars tomorrow. After not a perfect run up to qualifying, we go away finishing seventh and starting sixth due to Hamilton's penalty. I'm looking forward to tomorrow to get points."