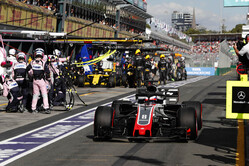 Haas team boss Guenther Steiner has revealed that changes have been made to the team's pit-stop crew following the wheelnut errors in Australia which saw Romain Grosjean and Kevin Magnussen forced to retire while both were running in (high) points earning positions.

Within the space of a couple of laps, the team's two drivers had pulled to the side of the track, Magnussen suffering a loose left-rear and his French teammate a loose left-front.

Appearing to confirm that the mistakes were down to human error, Steiner revealed in Bahrain this morning that one crew member has been moved to another role while an additional member has been added to the crew as a 'fail-safe'.

"We've swapped a few positions," the Italian told reporters. "The main reason is not because they did the mistake, but getting their confidence back.

"If you keep on doing the same and the guys are not confident, the risk that you have a mistake again is high, so we swapped positions," he added. "You pair different people and give them different jobs, because you need so many people anyway, and that is what we did for this race, and that is what we are doing since yesterday practicing."

Referring to the new additional 'fail-safe', who will alert the drivers of any issues, he said: "We put an additional person in, so that if it isn't caught we can stop the car, push it back and put it right."

Admitting that lack of practice also contributed to the errors, Steiner confirmed that pit-stop practice has been ramped up since Melbourne.

"We're putting in as much as possible," he said, "as long as the guys are physically comfortable to do it. As soon as they get tired you don't learn anything except that you wear them out. It's for the team manager to decide when that point is reached. But we are going back to do it like we did last year, which we didn't do in Australia."