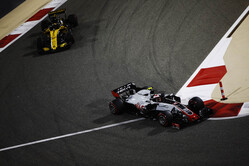 Haas F1 Team equaled its best result in its still young history competing in the FIA Formula One World Championship as driver Kevin Magnussen finished fifth in the Bahrain Grand Prix Sunday at Bahrain International Circuit in Sakhir. The 5.412-kilometer (3.363-mile), 15-turn track has proven to be a good one for the American squad, as it was Magnussen's teammate, Romain Grosjean, who finished fifth in the 2016 Bahrain Grand Prix to give Haas F1 Team its best finish in only its second race.

The resulting 10 points from Magnussen's fine effort in this year's edition of the Bahrain Grand Prix placed Haas F1 Team seventh in the constructor standings after two races, eight points ahead of eighth-place Sauber and only two points behind sixth-place Toro Rosso.

Magnussen began his sixth point-scoring drive as a member of Haas F1 Team from sixth in the 20-car field. He utilized a two-stop strategy to earn his third career top-five finish.

After a spirited opening-lap battle with the Renault of Nico Hulkenberg before eventually pulling away, Magnussen rose to fifth after fourth-place starter Daniel Ricciardo was forced to pull his stricken Red Bull off the track. Magnussen made his first pit stop on lap 13, jettisoning the Pirelli P Zero Red supersoft tires he used to qualify and start the 57-lap race with for another set of supersofts. This dropped Magnussen to 12th, where he had to work to get around the Williams of Sergey Sirotkin.

Magnussen finally made his way past Sirotkin on lap 16, and with the pit strategies of other teams playing out, was back in the top-10. Magnussen eventually worked his way back to sixth before pitting for his final time on lap 27 whereupon he donned a new set of Yellow soft tires that would take him to the finish. Emerging from the pits in 12th, he immediately made his way past the Force India of Sergio Perez and, as other two-stop strategies took place, Magnussen advanced up the leaderboard, eventually taking fifth place after Fernando Alonso pitted his McLaren on lap 39.

With a healthy 24-second margin over sixth-place Hulkenberg and fourth-place Pierre Gasly comfortably ahead by 12 seconds, Magnussen wheeled his Haas VF-18 home in fifth place, scoring his best result since finishing fifth in the 2014 Russian Grand Prix while driving for McLaren. The points haul placed Magnussen ninth in the driver standings, two ahead of Max Verstappen of Red Bull and two behind Ricciardo and Gasly.

Grosjean endured a more difficult time in the Bahrain Grand Prix. He started 16th and ran as high as seventh before making his first pit stop on lap 18, swapping his Red supersofts for new Yellow softs. Grosjean emerged from pit lane in 17th and worked his way back to ninth by lap 28. But shortly after returning to the top-10, pieces of the left-side bargeboard came off Grosjean's car as he drove down the straight and into turn one. Grosjean eventually pitted on lap 30 for new supersofts and dropped to 16th.

Despite the aerodynamic imbalance of the damaged left-side bargeboard, Grosjean eventually made his way back to 10th once Brendon Hartley pitted his Toro Rosso on lap 42. But Grosjean's time back among the top-10 was short-lived. On lap 44, the Renault of Carlos Sainz Jr., and the Force India duo of Esteban Ocon and Perez got by, pushing Grosjean down to 13th.

Haas F1 Team opted to bring Grosjean in for a third pit stop on the following lap, where it was discovered the remaining portions of the bargeboard had lodged itself underneath the car. With new supersofts on his Haas VF-18, Grosjean returned to the race in 15th.

Romain Grosjean: "It was always going to be difficult starting from the back of the grid. I didn't really have a good first lap, but after that I came back through the field quite nicely. If I hadn't lost my bargeboard I'd have finished potentially seventh or eighth. That was a problem - losing parts as we're just running on track. On those two laps, the car was absolutely undriveable. We had to pit to remove the part, so that was the end of the story."

Kevin Magnussen: "I'm happy about today. It's really good to get 10 points and get our championship started. I'm really proud of the team, especially the guys on the pit stops. They had a tough time between Australia and here. They kept their heads and got back to basics. They did what they do best and they delivered today. I couldn't really fight with Gasly in the Toro Rosso ahead in fourth, but still, we're happy with P5."

Guenther Steiner: "I'm pretty happy with fifth place. There were maybe a few points lost with Romain, who was going strong from 16th up to 10th, but then he needed an additional pit stop to clear off some parts of the car which had come loose. We have to investigate that to see if he went off or hit something at the start. All in all, it's been a good weekend. The pit stops were good. We had five in the race and they were all good. I think the guys have recovered and I'm very proud of them, and they can be proud of themselves for what they've achieved this weekend. Coming back from two failed pit stops at the last race in Australia to take a fifth-place finish without a problem, it's fantastic."