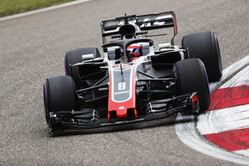 The single point earned by Magnussen strengthened Haas F1 Team's seventh-place standing in the constructors' ranks, as it increased its margin over eighth-place Sauber to nine points while cutting the deficit to sixth-place Toro Rosso to just one point.

Magnussen started 11th in the 56-lap race around the 5.451-kilometer (3.387-mile), 16-turn track. He employed a one-stop strategy, swapping the Pirelli P Zero Yellow soft tires he started the race with for the harder, more durable White medium tire on lap 24. The pit stop dropped Magnussen from a high of seventh to 10th, as the pit window opened early on lap 10 when Toro Rosso's Brendon Hartley came in for service, setting off an elongated pit cycle that saw an array of strategies.

A safety car period beginning on lap 32 further complicated matters, as it allowed some drivers to duck into the pits for service and minimize any lost track position. Magnussen and Grosjean stayed out on the track, improving their track position as Magnussen climbed back to seventh and Grosjean broke into the top-10. The downside, however, was the drivers behind the Haas F1 Team duo were on much fresher tires, and when the race returned to green, the discrepancy was apparent.

Nico Hulkenberg wheeled his Renault past Magnussen on lap 35 to take seventh, while Grosjean came under attack from the McLaren of Fernando Alonso and the Renault of Carlos Sainz Jr., to fall out of the top-10.

Grosjean wound up with a two-stop strategy. He pitted on lap 16, jettisoning the Purple ultrasoft tires he used in the final round of qualifying for White mediums. He pitted again on lap 46, having wrought all he could from those mediums, for a slightly used set of ultrasofts that would take him to the finish. Grosjean emerged from the pits in 20th and rallied to finish 17th.

Magnussen held steady in eighth until lap 48 when both Alonso and Sainz got by. Magnussen was able to hold onto 10th and maintain the gap over 11th-place Esteban Ocon, crossing the stripe with a 4.456-second advantage over the Force India driver to finish in the points.

Formula One takes a weekend off before returning to action for the Azerbaijan Grand Prix April 29 at Baku City Circuit where Ricciardo is the defending race winner.

Romain Grosjean: "We made a ballsy strategy going on the ultrasofts to mediums. Unfortunately, the misfortune kept going with me because I knew from the safety car in the middle of the race - when I was on the very long stint on the medium - we were not going to pit. I knew it would be very difficult at the restart, and it was. I tried to hang on to P11 as long as I could but, eventually, the two Force Indias passed me. We came in for another set of ultrasofts for the last 10 laps. They were encouraging as there was very low degradation, and the car felt really good. I knew things were going to be very difficult at the safety car, though."

Kevin Magnussen: "I just got unlucky with the safety car. Our strategy was paying off to begin with, but then we got the safety car at a bad time. We didn't get the advantage out of the strategy that we would've had otherwise. I don't know if we should've pitted. It was a tough choice. I just think the safety car came at a very unlucky time and it meant we couldn't score more than the one point. That's still okay, but we had hoped for a bit more. It's a long season and, hopefully, we'll keep scoring points. I'm proud of how we're performing as a team. We need to keep that up."

Guenther Steiner: "A tough finish to the day. The safety car destroyed our race, obviously. I think we were on the way to be seventh with Kevin, and eighth or ninth with Romain. The Renaults got a free pit stop and, therefore, we ended up where we were. We couldn't get the tires back up to temperature after the safety car. Kevin fought hard to finish 10th, and Romain just had to change tires again as we couldn't get any temperature into them anymore. It's a tough end to the day but, again, we showed that we can fight in the positions that we fought in from the last two races. I think in some places we can be best of the rest. We go with a positive attitude to Baku and try to do there what we haven't done over the first three races."