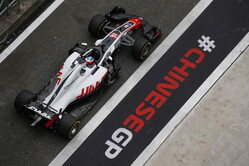 The third round of the 2018 FIA Formula One World Championship began with practice Friday at Shanghai International Circuit as teams prepared for the Chinese Grand Prix Sunday.

Haas F1 Team drivers Romain Grosjean and Kevin Magnussen were on the same program for FP1 - an installation lap on Pirelli P Zero Yellow soft tires followed by a baseline stint on that same set of softs before switching to the Purple ultrasoft tire for two additional runs, both of which came on the same set. Each driver tallied 21 laps, with Magnussen securing the seventh-fastest time while Grosjean earned the ninth-quickest time. Magnussen's best lap was a 1:35.178 earned on his 12th tour, and Grosjean's top mark was a 1:35.718 that came on his 13th lap. Both drivers procured their quick times with their Haas VF-18s outfitted on ultrasofts.

Rain fell only in the waning moments of FP2, allowing drivers plenty of dry running time. Magnussen took full advantage by knocking down 26 laps with a best time of 1:34.458 on his 12th tour that put him seventh on the speed chart. Grosjean also ran 26 laps, but instead focused on high-fuel, long runs. As a result, his best time was a 1:36.471 on his seventh lap, which put him 19th overall. Magnussen began FP2 on the White medium tire, logging nine laps before switching to the Purple ultrasoft for the remainder of the session. Grosjean took a different approach, beginning FP2 on the Yellow soft tire. He ran nine laps on softs and then switched to ultrasofts before returning to softs for a final, six-lap drive. Magnussen's quick time was earned on ultrasofts while Grosjean's best lap came on softs.

Hamilton remained atop FP2 with a mark of 1:33.482, which was a scant .007 of a second better than his nearest pursuer, Räikkönen. The Shanghai track record of 1:31.678, set last year by Hamilton in the final round of qualifying, remained intact.

Romain Grosjean: "Well, we've done quite a bit today. We've tried different things on the car - some worked, some didn't. We didn't quite get the qualifying simulation lap right, which is a bit of a shame. The longer run felt better, which is always encouraging and what you want for the race. We know Shanghai is a difficult circuit, so we're studying all the options. The time sheet for today is not really representative of where we are."

Kevin Magnussen: "It was a good day for us - another good Friday. I'm happy with what we've seen. We need to work a bit on tire management, especially for the first stint on the ultrasoft, but then I think everyone's struggling a little bit. Let's see what happens. The team's doing a good job. The car's behaving well. It's performing at a good level. I'm happy. I had a good feeling in the car."

Guenther Steiner: "FP1 went very well. It was very solid, FP2 as well - Kevin was solid. We learned a lot and did all our testing. With Romain, we still have some work to do with his balance. Overall, it was a good day. We didn't have any issues with the car and we learned a lot."