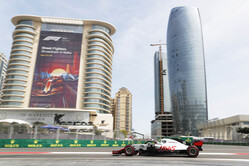 The fourth round of the 2018 FIA Formula One World Championship began with practice Friday at Baku City Circuit as teams prepared for the Azerbaijan Grand Prix Sunday.

Grip was at a premium throughout FP1, with difficult track conditions conspiring to leave Haas F1 Team drivers Romain Grosjean and Kevin Magnussen 14th and 18th, respectively, at the end of the session.

Magnussen was the first Haas F1 Team driver out in FP1, followed shortly by Grosjean. Each driver was on the same program - an installation lap on Pirelli P Zero Red supersoft tires followed by a baseline stint on those same supersofts before switching to Purple ultrasoft tires. With ultrasofts outfitted on the Haas VF-18s, Grosjean and Magnussen each made two separate runs, both of which came on the same set of tires.

Grosjean logged 23 laps in FP1 with his best time coming on his final lap - a 1:46.856 that placed him 14th among the 20-strong field. Magnussen recorded 18 laps, with his best time being a 1:47.434 earned on his ninth lap that put him 18th overall. Both drivers earned their quick times shod on ultrasofts.

Lap times dropped in FP2 as Haas F1 Team made incremental progress on an evolving racetrack with more rubber being laid down amid slightly cooler conditions. Grosjean continued to fight instability in his racecar while Magnussen sought overall improvement.

Magnussen wrapped FP2 as the ninth-quickest driver with a time of 1:43.977, which was 3.457 seconds better than his best lap in FP1. His quick time came on the 13th of his 29 laps riding on a set of ultrasoft tires. Grosjean shaved 2.431 seconds off his FP1 time with a lap of 1:44.425 to earn the 13th-fastest mark. His fast lap came on his 12th tour, also while utilizing ultrasofts. He completed 27 laps.

Romain Grosjean: "It was a pretty good day. We've learned quite a bit. It's been interesting to find out the right aero level, and finding the right top speed against the others. There are a few things we can do to get better. It seems that a small thing here can make a big difference on the time sheets. I'm confident we're going to get on top of it for tomorrow. I feel good in the car - there are just a few things we need to adapt, and tomorrow should be a better day in terms of lap times. The feeling is good."

Kevin Magnussen: "It's been an interesting day. There was a big difference in car behavior between FP1 and FP2. We made a good step between the two sessions. I was much happier with the car in FP2. Hopefully, we can carry that into tomorrow. It looks like it's going to be a lot windier on Saturday, so once again the track's going to change. We'll try and hit the target and adapt to that if those are the conditions."